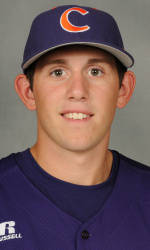 Scott Weismann struck out the only two batters he faced to lead Clemson to a 2-0 win over Wake Forest in front of 4,685 fans at Doug Kingsmore Stadium on Friday night. The Tigers, who won their sixth game in a row and took a 1-0 series lead, improved to 24-13 overall and 10-9 in the ACC. The Demon Deacons, who had gone 70 straight games scoring at least one run, fell to 15-24 overall and 6-13 in ACC play.

The Tigers grabbed a 1-0 lead on Will Lamb’s run-scoring double in the eighth inning and Weismann closed the door in the ninth inning to move the Tigers’ ACC record above .500 for the first time in 2011.

Leone (2-1) pitched a career-long 8.1 innings to earn the win. It was also the longest outing by a Tiger in 2011. The Norwich, CT native allowed just three singles, no runs, and three walks with 10 strikeouts, tied for the most by a Clemson hurler in 2011, in throwing 118 pitches. Weismann recorded his second save in as many games and second save of the season by striking out both batters he faced. The two Tiger righthanders combined to allow just six baserunners and faced only five batters over the minimum. They did not allow a Demon Deacon past second base as well.

The Tigers wasted little time taking the game’s first lead in the first inning. John Hinson led off with a walk after fouling off the first two pitches and scored on Pohl’s double down the right-field line.

After six scoreless innings, the Tigers tacked on a run in the eighth inning. Brad Miller reached on an infield single with two outs, stole second and third, and scored on Lamb’s double to right field. The two-bagger extended Lamb’s hitting streak to 12 games, the longest by a Tiger in 2011.

In the ninth inning, Leone walked Mac Williamson with one out, then the Tigers called on Weismann, who struck out Matt Conway and Charlie Morgan looking to end the game.

Conway had two of Wake Forest’s three hits in the contest.

Clemson and Wake Forest will play game-two of the three-game series on Saturday at 6:30 PM.