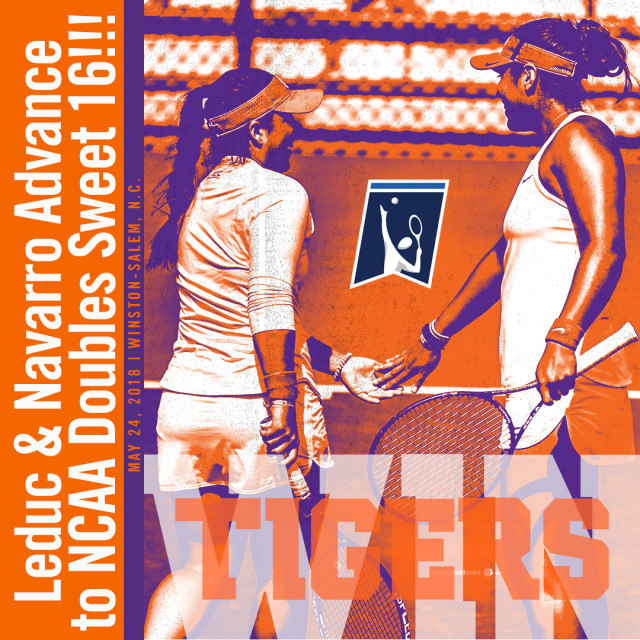 CLEMSON, S.C. – The Clemson doubles duo of Marie-Alexandre Leduc and Fernanda Navarro won their first-round match in the 2018 NCAA Doubles Championships in Winston-Salem, N.C. on Thursday afternoon. With the win in the first round of the 32-team draw, the pair advances to the Sweet 16, to be played on Friday, May 25.

Leduc and Navarro, ranked 21st nationally, defeated UC Santa Barbara’s Natalie Da Silveira and Palina Dubavets, ranked 41st, in straight sets, 6-3, 6-1. The Tiger tandem will face Duke’s Ellyse Hamlin and Kaitlyn McCarthy, the ninth-ranked doubles team in the nation, and a No. 5-8 seed in the tournament draw, on Friday. Match times for the Round of 16 will be announced on Thursday evening.

In NCAA Singles Championship action on Wednesday, May 23, Leduc dropped her first-round match to Pepperdine’s Ashley Lahey, a No. 9-16-seed in the draw, by a score of 6-1, 6-3. The loss concluded a fantastic singles season for the Saguenay, Quebec native, who finished the season with a 22-12 overall record, along with 10 wins against nationally-ranked singles opponents.