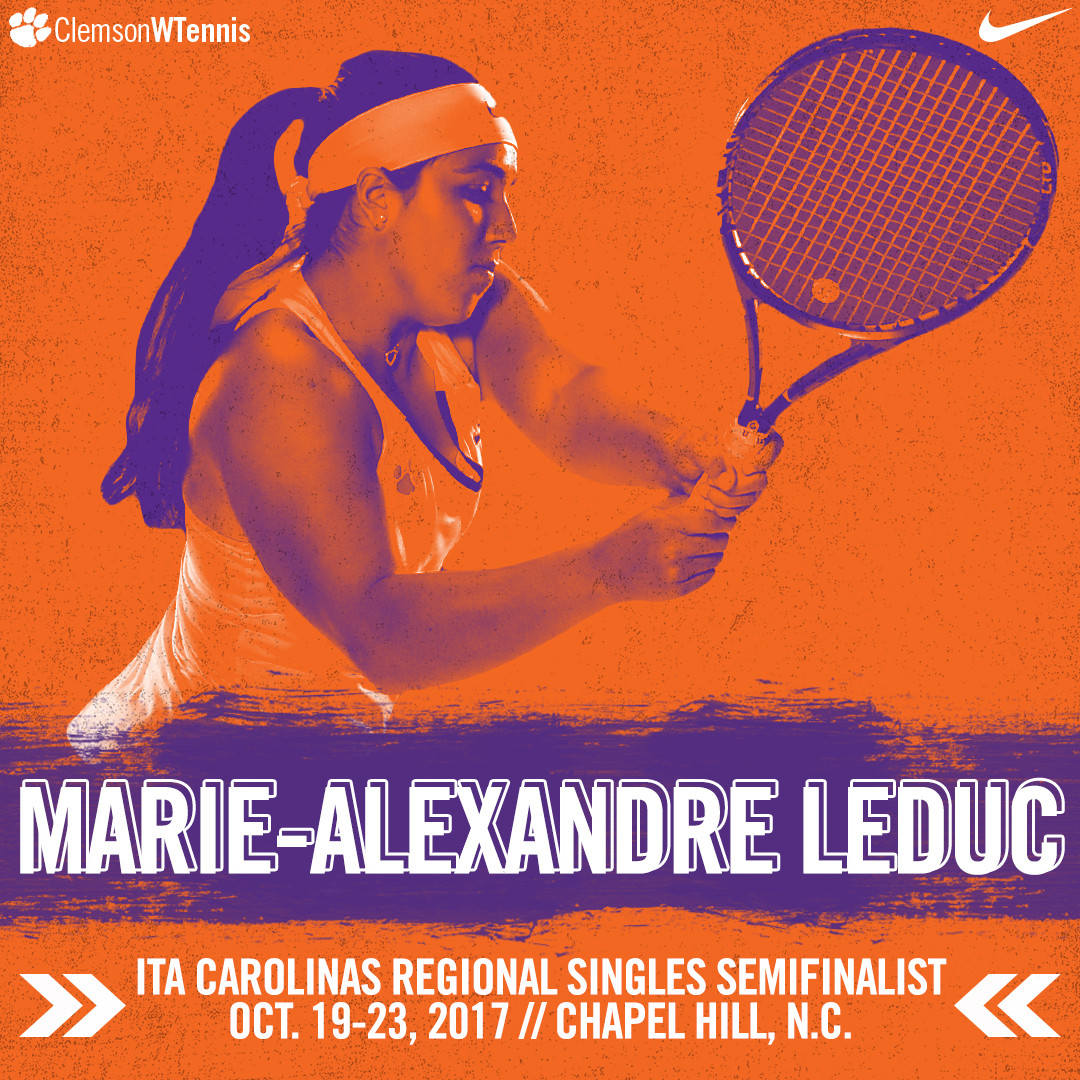 CHAPEL HILL, N.C. – Junior Marie-Alexandre Leduc defeated three ranked opponents and a No. 5-8 seed in the singles draw to advance all the way to the semifinals of the ITA Carolinas Regional, held Oct. 19-23 in Chapel Hill, N.C. Leduc and teammate Fernanda Navarro reached the quarterfinals of the doubles draw, and overall, the Tigers were 18-11 in singles play and 5-4 in doubles play at the ITA regional event.

Leduc, ranked 70th in singles according to the ITA’s fall preseason rankings, opened the tournament with a 6-3, 6-2 win over No. 116 Silvia Chinellato of South Carolina followed by a 7-6(6), 7-5 win over No. 95 Celia Ruiz of East Carolina. In the Round of 16, she downed No. 5-8-seed Ellyse Hamlin of Duke in straight sets, 6-2, 6-2. Leduc upset No. 42 Alexa Graham of North Carolina in the quarterfinals, 7-5, 6-4, before falling to No. 55 Winthrop’s Lauren Proctor, in the semifinals. Proctor went on to win the singles title.

In other singles action, junior Fernanda Navarro defeated Wake Forest’s Chandler Carter in the first round before falling to No. 4-ranked Sara Daavettila of North Carolina in the second. Senior Daniela Ruiz, junior Ally Miller-Krasilnikov and sophomore Constanza Gorches each went 2-0 in the qualifying draw in order to qualify for the singles main draw, which gave the Tigers seven singles players in the bracket of 64 players.

Sophomore Tate Schroeder fell to No. 22 Jessie Aney of North Carolina in the main draw, but came back strong in the consolation draw, winning four-straight matches before falling to Alisa Soloveva of Winthrop in the consolation singles final.

Leduc and Navarro were the highlight of doubles play for the Tigers, as they defeated teams from Wake Forest and South Carolina en route to the quarterfinals, where they fell to No. 12 Aney and Graham of North Carolina. Ruiz and Schroeder teamed up to go 2-1 in doubles play, reaching the Round of 16 before falling to No. 26 Rogers and Wiktorin of NC State, a No. 1-4 seed in the draw.

The Tigers return to action this weekend when the team heads to Tuscaloosa, Ala. for the Roberta Allison Fall Classic on Oct. 27-29.