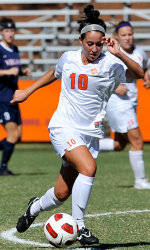 The midfielder from Arlington Heights, IL ranked second on the team in scoring in 2010, recording four goals and two assists for 10 points. She played in 1513 minutes on the season, notching more time on the field than all but three other Tigers.

Laxgang scored a hat trick in Clemson’s 4-1 victory over Francis Marion on October 24. The hat trick was the 18th in Clemson history, and the first since a four-goal performance by Julie Bolt in 2008.

Laxgang was one of 10 rookies from the Atlantic Coast Conference to be named to the 11-member first team or the 11-member second team.