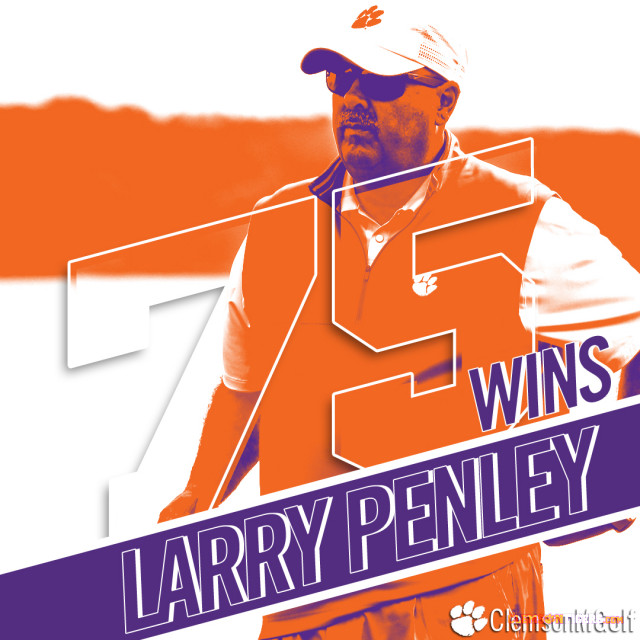 Head Coach Larry Penley won his 75th tournament at Clemson on Feb. 20, 2018 when the Tigers came from eight shots back entering the final round to win the Puerto Rico Classic by a shot. It marked the second year in a row Penley and the Tigers have won this national event. Below are some facts about Penley’s 75 Wins:

-Penley has one NCAA Championship, seven NCAA Regionals (Most among all Division I coaches) and nine ACC titles.

-The win in Puerto Rico was the 27th in which Clemson trailed entering the final round. His teams have won by at least 10 strokes 31 times.

-The shortest course his team has played in gaining victory was at the Palmetto in Aiken, SC, which plays at 6617 yards. The longest course that has seen Clemson gain a win is still Karsten Creek in Stillwater, Okla where Clemson won the NCAA National Championship on a 7301-yard layout

-Penley’s players have 52 individual tournament wins at the collegiate level. D.J. Trahan has the most with five. His players have won one NCAA Tournament (Charles Warren, 1997 at Conway Farms), two NCAA Regionals, six ACC Championships, two US Amateurs, three United States Public Links, two North-South Amateurs (at Pinehurst No. 2) and 13 South Carolina Amateurs. The 13 wins at that tournament don’t include two that Penley won as a player in 1987 and 1988.