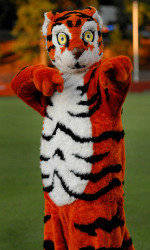 CLEMSON, SC – A large crowd is expected for the men’s soccer match between Clemson and South Carolina at Historic Riggs Field on the Clemson campus on Friday, September 2, at 7:00 p.m.

Clemson University Athletic and Public Safety Officials are encouraging fans to arrive early and be safe as they approach the Clemson area, as some streets will be closed due to the First Friday Parade.

Around 7,000 fans are expected for the match on Friday. The First Friday Parade will also be in progress beginning at 6:00 p.m., starting at the intersection of Cherry Road and Old Greenville Highway near the President’s Home. The parade will continue towards the downtown area and will conclude at Historic Riggs Field around kickoff time. Roads around the downtown area will be closed due to the parade.

Fans attending the game are encouraged to come to the Clemson area by using Perimeter Road, and use the Avenue of Champions or Williamson Road to reach the parking areas for the soccer match. Lots near the football stadium will be used for the overflow crowd.

Organizers are attempting to break the Clemson men’s soccer regular-season attendance record of 7,012 on Friday.