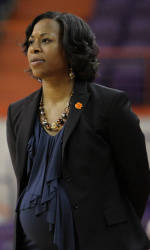 Lady Tigers Venture to Providence to take on Friars Thursday

Game NotesGame Setup:Site: Alumni Hall/ Mullaney GymDate: Thursday, December 22, 2011City: Providence, RITime: 12:00 PMRadio: WCCP-FM 104.9; WCCPFM.com(Don Munson – play-by-play,Kanetra Queen – color)Webcast: Audio OnlyLivestats: GametrackerCLEMSON, SC – The Clemson Lady Tigers will take on the Providence Friars on Thursday at noon in Providence in the final game before an eight-day holiday break from competition. The Lady Tigers (4-5, 1-2 road) will look to take momentum from Sunday’s 68-48 victory over N.C. Central on the road against the Friars, who enter at 5-6 overall after a loss to No. 19 Delaware Tuesday. The game will be broadcast live on WCCP-FM and at WCCPFM.com with Don Munson on play-by-play and Kanetra Queen on color commentary. Clemson leads the all-time series, 2-0, against the Friars, but this is the first meeting in Rhode Island. Clemson and Providence played in the 1991 NCAA Tournament, in which Clemson advanced to the Sweet 16. The two teams have not met since a 88-79 Clemson victory in 1994. The Lady Tigers will look to continue their hot shooting a rim-protection on Thursday. The Lady Tigers hit a school-record-tying 11 3-pointer against NC Central on Sunday, and recorded 12 blocks, the sixth-most in a game in school history. With their 7.1 blocks per game average, Clemson ranks first in the ACC and fourth nationally in shot-blocking. Lindsey Mason has led the way in that category with 23 on the season, or 2.6 per set, which is third-best in the conference. Offensively, freshman Nikki Dixon continues to pace Clemson at 14.3 points per game, which is best in the ACC among all freshmen, and 10th nationally among rookies. Dixon also ranks fourth overall in the ACC in steals per game (2.8) and sixth in minutes per game (32.3). Kelly Gramlich exploded for 20 points on Sunday as well, hitting 7-9 from the floor including a 6-8 mark from behind the arc. She was named the ACC Rookie of the Week for her performance, which included four rebounds as well. Chelsea Lindsay has been terrific at point guard for the Lady Tigers, and has been called on tot he tune of 32.7 minutes per game. The freshman is averaging 4.0 assists per game and has a 1.5:1 assist-to-turnover ratio for the season, which included six assists and no turnovers in 33 minutes against N.C. Central, a school just two miles form her high school. Shaniqua Pauldo is the only other Lady Tiger in double-figures scoring, averaging 10.8 points per game and shooting .470, and is also averaging 5.6 boards per game. Sophomore Quinyotta Pettaway is coming off a career-best 12 rebounds on Sunday, and is averaging 7.6 per game this season, 8th-best in the ACC. After the game with Providence, Clemson will break from competition until Dec. 30 when they take on UAB in Littlejohn Coliseum at 7:00 pm in the final game before ACC play opens on Jan. 2.