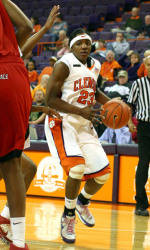 CLEMSON, SC – The Clemson women’s basketball team will head to Greensboro, NC on Thursday for the 32nd annual ACC Tournament. The Lady Tigers, as the #9-seed, will take on eighth-seeded NC State at 3:00 p.m. at the Greensboro Coliseum. Clemson (11-18, 4-10 ACC) will look to carry the momemtum into tournament play from a come-from-behind, last-minute victory over Florida State on Saturday night that wrapped up the regular season.

The game will be video streamed on ACC Select and livestats will be available as well. Fans can access links to both on www.clemsontigers.com. The Clemson Tigers Sports Network will broadcast the action on the airwaves. Don Munson will call the action while Kanetra Queen will provide color commentary.

Five players are averaging at least 8.0 points per game for Head Coach Cristy McKinney’s Lady Tigers, while Lele Hardy leads the team with a 7.1 rebounding average.

Scouting the Wolfpack Following its 32-point victory at Littlejohn Coliseum on Feb. 28, NC State fell to fifth-ranked Maryland, 76-64, at home to drop to 18-11 overall and 6-8 in the conference. The Wolfpack enter the 2008 ACC Tournament as the #8 seed, earning a rematch with the Lady Tigers.

Khadijah Whittington, a First-Team All-ACC selection, leads the conference in rebounding (11.3 rpg) and ranks third in scoring (17.2 ppg). The senior from Roanoke, VA also owns team-bests with 71 steals and 45 blocked shots, while shooting 51.9-percent from the field.

Leading the Wolfpack offense is junior point guard Shayla Fields, who is averaging the most minutes per game in the ACC. Fields has haded out 102 assists this season with just 69 turnovers and also owns a 13.3 scoring average.

Overall, NC State is out-scoring its opponents by 10.5 points per game (66.5-56.0) and is shooting a .418 figure from the field. The Wolfpack won four of its last six games, suffering the two losses at #2 North Carolina and to the Terps.

* Christy Brown – played 34 minutes with six points, seven assists and four rebounds in 2007 tournament loss to Virginia. * Morganne Campbell – scored three points with two rebounds in just 11 minutes of action last year against Virginia. * Moreemi Davis – averaging 6.0 points and 6.0 rebounds in two career ACC Tournament games; had nine boards against Virginia in 2008. * Lele Hardy – had 14 points with four rebounds and three steals as a freshman in 2007. * D’Lesha Lloyd – has seen production in tournament games improve over her career, from 2 points as a freshman to 11 against NC State as a sophomore and 23 versus Virginia last season; rebounding figures have also increased to an average of 6.0 per game.

Clemson’s ACC Tournament History The Clemson women’s basketball team owns a 27-28 overall record in the 31-year history of the ACC Tournament. The Lady Tigers have won the championship twice and have advanced to final game on six occasions. Clemson has reached the semifinal round 17 times in history. Last season, the Lady Tigers fell to Virginia, 89-82, in the opening round. Their last victory in the tournament was a 63-61 decision over Maryland in 2003.

When Facing NC State In The Tournament NC State has been Clemson’s most popular opponent in the history of the conference tournament as the two teams have met 14 times in the event. The Wolfpack has won 10 of those match-ups, including the most recent meeting, a 67-53 win in the first round of the 2006 ACC Tournament in Greensboro, NC. The Lady Tigers last defeated NC State in the semifinals of the 1999 tournament, when they went on to win the title.