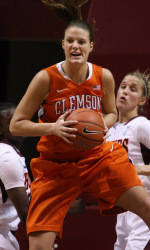 BLACKSBURG, VA – Clemson’s defense stifled Virginia Tech to the tune of .215 shooting as the Lady Tigers (6-14, 2-7 ACC) overcame a 15-point first-half deficit to win, 55-51, in overtime in Blacksburg, VA on Friday night. Freshman Nikki Dixon, who received two stitches in her forehead after a first-half collision, scored 13 points after halftime on her way to a game-high 19 for the Lady Tigers.

Clemson improved to 24-15 all-time in overtime games, as they have now won seven in a row, and nine of the last ten. Itoro Coleman is now 2-0 in overtime contests, as Clemson overcame a nine-point halftime deficit at Wake Forest last season to win in overtime.

Senior Lindsey Mason pulled down a career-high 14 rebounds, and also added 10 points (2-8 FG, 6-6 FT) for the third double-double of her career, and the second against the Hokies. She also had four blocks and tied a career-high with four assists in the game in a career-high 37 minutes.

Shaniqua Pauldo had nine points off the bench, and Chelsea Lindsay hit two of her three shots on the way to seven points. Clemson won despite coming up on the shot end in turnovers (26-15), rebounds (47-52), and shot attempts (49-79). The Hokies had 28 offensive rebounds in the game, but managed just 20 second chance points and 14 points in the paint overall.

Aerial Wilson hit four threes in a Virginia Tech record 15 attempts on her way to 14 points, while Monet Tellier hit just 4-22 form the floor and 1-13 form behind the arc, but notched 13 points and nine rebounds. LaTorri Hines-Allen had five points and a game-high 16 rebounds before fouling out in overtime after sending the game to the extra period with a put-back.

Clemson trailed by two before a 13-0 Tech run gave the Hokies a 24-9 advantage with 6:33 to play in the first half. A Dixon three stopped the run, and after a Wilson lay-in with 5:41 to play, Clemson held the Hokies without a point for the next 7:52, spanning halftime.

Clemson went into the break trailing by just five at 26-21, and held Tech to just .243 shooting in the first half. The Hokies hit 5-18 behind the arc, but 4-19 inside it, but had 13 offensive boards, scoring 13 points off second chance.

A Pauldo layup and a Dixon steal and layup w/ 11:34 to play to give Clemson the lead back, and she then hit a left wing three with 10:57 to play to give Tigers 36-32 lead. Virginia Tech came back to knot it at 38-38 on Wilson’s fourth three-pointer of the game, but Dixon responded with a rim-rattling three from the left wing to again put Clemson up three.

On the next offensive possession, she went to the line, and hit both to put Clemson up five, and Pettaway hit a streaking layup to give Clemson the 45-38 lead with 4:52 to play. Clemson led, 47-40 with 2:49 to play, but Tech held Clemson without a point as they went on a 7-0 run to tie it at 47-47 on a Hines-Allen put-back with 51.0 seconds to play. Dixon maneuvered around the defense but came up short on a layup with 15 seconds to play, but she forced a turnover with 9.1 to play. With heavy defensive pressure, the Tigers couldn’t get a shot off as time expired, sending it to overtime.

Gramlich started the scoring in OT with a 15-foot jumper, but Tech had an answer in the form of Tellier. Dixon came back with a hoop and a foul to give Clemson a three-point lead. Clemson then went inside and Pauldo hit the second of two free throws to give Clemson a 53-49 advantage.

Tellier cut it to two with a pair of freebies, but the Hokies sent Lindsay to the line, where she hit one of two. The Tigers then got a stop on the defensive end, with Lindsay pulling down the rebound, and she was fouled with 8.2 seconds to play. She hit the first but missed the second, and Clemson held on for the four-point win as Telliers 13th three-point attempt hit the front of the rim.