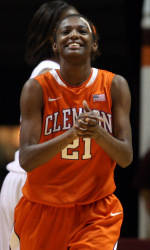 Clemsontigers.com exclusive: Even stitches could not slow Dixon, Lady Tigers

BLACKSBURG, VA — Virginia Tech did everything it could to stop Clemson freshman Nikki Dixon Friday night at Cassell Coliseum, including giving her the first two stitches of her career to the forehead. But even that did not slow down the reigning ACC Rookie of the Week.

Dixon scored a game-high 19 points, including a pivotal three-point play in overtime as she helped the Lady Tigers rally for a 55-51 victory over Virginia Tech.

“I had never had stitches before so it was a really shocking thing for me,” the freshman said. “When I went to the back to get stitches and stuff, I was just praying that my teammates were handling business out there. Then I came out and saw that we were only down by five points and I felt like it was time for me to contribute to that.”

And she did. After scoring six points in the first half, Dixon lit things up in the second half, draining three of her six three-point attempts in the second half. Her effectiveness allowed things to open up underneath for seniors Lindsey Mason and Shaniqua Pauldo. Mason finished with 10 points and 14 rebounds, while Pauldo came off the bench to score nine points and grabbed six boards.

“They did what they could to get things done,” Dixon said. “They were working hard to make things happen. That’s why I wanted to come back. I did not want to let them down or myself down. I wanted to fight over my adversity with these stitches and just fight through it.”

Clemson fought through a lot of adversity to pick up its second ACC road win of the season. The Lady Tigers trailed 26-11 midway through the first half, but used a 10-0 run to close out the first 20 minutes and trailed by only five points at the break.

“It feels good to get this win,” Mason said. “I feel like we dropped a few that we had a chance to win and it feels good to finally come out and get a win. I’m really proud of how hard everyone came out and played when their number was called.”

In the second half, Mason started things off with a basket and made two foul shots on another possession, while Pauldo made a jumper to extend the Clemson run to 18-2, giving the Tigers back the lead at 29-28 with 16:21 to play.

“We just came out ready to play,” Mason said. “We were down five points so we knew we had a chance to win. We were together as a unit on defense. Everybody was boxing out. We were able to play good defense and make the plays that we needed.”

The Lady Tigers extended their lead to as many as seven points, 45-38, thanks to a Quinyotta Pettaway layup with 4:56 to go. Clemson again went up seven, 47-40, and appeared in control when Mason hit two more free throws. The senior finished the night 6-for-6 from the foul line and also had four assists and four blocks to go with her 10 points and 14 boards.

“Mason came up big. She really did,” Clemson Head Coach Itoro Coleman said. “She started to rebound the ball really well and she was getting the ones we were not able to get at the beginning of the game. She also got some key blocks for us as well.

“Mason, she is a beast when she wants to be.”

But Clemson hit adversity for the third time in the game as the Hokies went on a 7-0 run to close out regulation. Following a couple of free throws, LaTorri Hines-Allen completed a three-point play to push Virginia Tech within two points, then she got a rebound off a miss shot and tied the game with a follow with 45 seconds to play.

Though she got a good look at the basket Dixon missed a layup with 18 seconds to play. But she more than made up for it on the next play. The freshman tied up Larryqua Hall for the inbounds pass after a Virginia Tech timeout, giving the Tigers the ball back due to the possession arrow. The Tigers failed to get off a shot as time expired on the next set, but Dixon gave her team another chance with overtime, and from there the Tigers found a way to get a rare road victory in the ACC.

“This was big,” Coleman said. “This is something we keep harping on all the time. Yeah, we gave up an opportunity to win the game in regulation, but our focus isn’t what we did wrong, but what we need to do right now at this moment.

“In overtime, we executed. We got stops and we scored. We made our free throws. Everybody that played pretty much contributed, which was really good to see.”