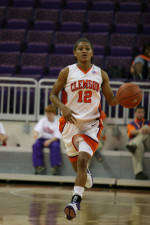 CLEMSON, SC – Tasha Taylor and Lele Hardy etched their names in the Clemson record books on Sunday afternoon, as the Lady Tigers held on to defeat Virginia Tech, 73-69, at Littlejohn Coliseum. Taylor handed out six assists in the game to bring her career total to 320 which moved her into the top 10 in school history, while Hardy recorded her 83rd steal of the season to rank fourth all-time. She is now just four steals away from the Lady Tiger freshman record of 87 set by Sheila Cobb in the 1979-80 season.

Both scored in double figures, as Taylor had a solid all-around game with 14 points, seven rebounds, two steals, a blocked shot and the six assists. Hardy posted 15 in the game on 6-of-13 shooting. D’Lesha Lloyd led Clemson (11-14, 3-7 ACC) in the scoring column with 17 points on the afternoon, while Susan Yenser totaled 10 in her first start of the season.

“We really didn’t want to let this one go,” Head Coach Cristy McKinney said. “We made some adjustments at half time to weather our usual second half storm.”

“Susan did a great job for us today. Christy Brown was sick earlier today and Susan stepped up in her place.”

Britney Anderson led Virginia Tech (16-11, 5-6 ACC) with 18 points, while Nare Diaware recorded a double-double with 12 points and 14 rebounds. Hokie guard Kirby Copeland scored the 1,000th point of her career in the contest, as she finished with 17 for the afternoon.

Hardy and Lloyd hit double figures in the first half, with 12 and 10, respectively, as Clemson held a 42-36 advantage at the break. The score remained tight throughout the first 13 minutes of the period, as the lead changed hands seven times and the teams were tied on six occasions. After being knotted at 25-25 at the 6:54 mark, the Lady Tigers scored six unanswered points en route to a 10-3 run over the next 1:50. The Hokies closed the gap to 38-34 with 2:35 remaining after a jumper by Brittany Cook, but Clemson responded with baskets by Taylor and Whitehurst. Anderson hit a shot with 27 seconds left to cut the Lady Tiger lead to six.

Virginia Tech scored the first four points of the second half and tied the score at 44 apiece at the 14:16 mark. Yenser hit a three to put Clemson back on top and the Lady Tigers maintained the advantage for the next eight minutes, as another Anderson field goal knotted the score at 58-58 with 5:48 remaining. The Hokies then took their first lead of the half at 60-58 on a jumper by Cook. Virginia Tech then led, 62-61, at the 3:08 mark before a basket by Lloyd gave Clemson the lead for good with 2:36 left.

The Lady Tigers then converted their free throws down the stretch and held on for the victory. Taylor hit four in the final 1:32, including the team’s 73rd point to put Clemson up by four with 23 seconds remaining. Whitehurst drained three and Lloyd made one in the closing minutes as well.

The Lady Tigers will be back in action on Thursday night, Feb. 15, as they will play host to Wake Forest at 7:00 pm at Littlejohn Coliseum.