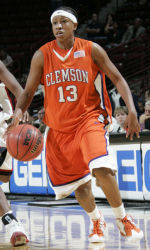 Clemson women’s basketball travels to Atlanta, GA on Wednesday for an ACC matchup with Georgia Tech. The Lady Tigers, 7-10 overall (1-4 ACC), will be playing their third conference road game. The Yellow Jackets, fresh off a 62-46 victory in Miami, are 11-5 overall and 2-3 in the ACC.

The Lady Tigers lost last time out, an 86-71 defeat at the hands of Wake Forest. Clemson did so despite shooting 44.6 percent as a team, its best mark so far in the 2004-05 season. The Lady Tigers held Wake Forest to 28 percent shooting in the second half. Khaili Sanders, who started her first game this season, tied a career-high with 17 points against the Deacons.

Reggie Maddox continues to pace the Lady Tigers offensively and defensively. She is first on the team in scoring (10.1 per game), assists (69), steals (33), and is second in rebound average (5.6 per game). She had 11 points in the loss at Wake Forest.

D’Lesha Lloyd has been the offensive leader for Clemson during ACC play. The freshman small forward is averaging 12.2 points per game over five contests, including 14 last time out against the Deacons. Lloyd is shooting 41 percent from the field in conference games.

Freshman Moreemi Davis has started two of the last three games for Clemson in the post. The 6-3 native of Perry, GA had four points and four rebounds in just six minutes against Wake Forest. Her fellow post player, 6-4 freshman Adrianne Bradshaw, scored eight points and grabbed five rebounds in 12 minutes against the Deacons.

Georgia Tech comes into Wednesday’s game as one of the league’s top defenses. Opponents are scoring just 54.6 points per game versus Tech, the second-best scoring defense mark in the ACC. Georgia Tech also does a good job limiting opponents’ shooting, as the Jackets currently boast a 35.3 percent field goal defense. That mark is also second-best in the conference this season.

Stephanie Higgs and Chioma Nnamaka, a pair of guards, both average in double figures for Georgia Tech. Higgs is at 13.9 points per game, while Nnamaka is at 13.4 points per game. The leading rebounder on the team with 7.3 per game is Jessica Williams.