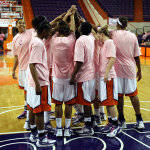 Lady Tigers Fall to No. 12 Duke at Home

CLEMSON, SC – Senior D’Lesha Lloyd scored the 1,000th point of her career on Wednesday night and the Lady Tigers made 13 free throws in a designated “Shoot For The Cure” contest, but Clemson suffered an 83-54 loss to 12th-ranked Duke at Littlejohn Coliseum.

Lloyd finished with 10 points on the night to become just the 20th player in program history to hit the milestone. The native of Columbia, SC currently leads the Lady Tigers in scoring, totaling 205 of her 1,002 points this season.

Wednesday’s game was also part of the Women’s Basketball Coaches Association’s “Think Pink” initiative to help raise breast cancer awareness and support the Susan G. Komen Foundation. Fans had pledged a dollar amount for every Clemson made free throw and the Lady Tigers responded with 13 on the night.

The Lady Tigers quickly took a 12-4 lead in the opening minutes of the game, but the edge vanished just as fast. The Duke defense picked up following the first media timeout, as Blue Devils held Clemson without a field goal until the 5:32 mark while scoring 18 of their own.

Abby Waner then hit back-to-back three-pointers to put Duke on top by 15 with 4:14 remaining and the Blue Devils took a 40-17 lead into the halftime break.

“Coming into the game, I was looking for focus and energy out of the girls,” said Clemson Head Coach Cristy McKinney. “We showed that during the first five minutes. After that, shots weren’t falling and we were making a lot of turnovers giving Duke the momentum to end the first half.”

“Things looked better during the second half,” McKinney added. “We played more productive and a lot of girls got playing time. We’re a young team and this game against Duke gave a lot of our girls good experience.”

The Lady Tigers (10-15, 3-7 ACC) shot nearly 40-percent and were only outscored 43-37 in the second half, but the Blue Devils had built a solid lead and stayed in control of the game for their 19th win of the season.

Lele Hardy and Morganne Campbell each had five rebounds to lead the Lady Tigers on the boards, but Duke dominated the glass with a 54-34 rebounding edge.

Clemson will have an eight-day layoff before traveling to Charlottesville, VA to take on the Virginia Cavaliers next Thursday night.