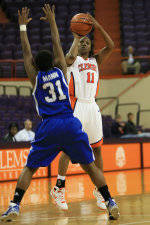 CLEMSON, SC – The Clemson women’s basketball team lost on Saturday evening by an 82-75 count to the Georgia State Panthers at Littlejohn Coliseum. With the loss, the Lady Tigers fell to 2-2 for the young season, while the Panthers won their first contest of the 2008-09 season.

Lele Hardy kept Clemson in the game throughout the night, scoring 22 of her career-high 32 points after halftime. Her 32 points were the most for any Lady Tiger since Lakeia Stokes scored 32 almost five years ago to the day, November 21, 2003. Hardy hit shots from just about everywhere, going 12-18 on the night and connecting on 5-6 from behind the arc, while adding three perfect free throw tries as well.

After a Jasmine Tate field goal brought Clemson to within five points with 90 seconds remaining, the Lady Tigers were unable to stop Brittany Hollins’ dribble drive as she got to the rim for two with just under a minute to play. Hardy would make a three to take the game down to four at 76-72 with 50 seconds remaining, but the Panthers were 6-6 from the line in the final 36 seconds to ice the game.

Danyiell McKeller had a big night for Georgia State, scoring 24 points and pulling down 11 boards in 35 minutes. Brittany Graham matched Hardy’s three-point effort, also going 5-6 from deep as part of her 17 points. Three other Panthers reached double-figures, including Dana Olson, who went 8-8 from the line as part of her 12.

Sophomore Kirstyn Wright was the only other Clemson player in double-figures, as she scored 11 in 27 minutes of play. Tate led the Tigers with seven boards, to go along with five points and three blocks.

For the night, the Lady Tigers committed 28 turnovers, leading to 32 Georgia State points, which were able to overcome being outrebounded by 13. Eighteen of the turnovers were on steals by the aggressive Panther squad.

Clemson had an efficient first half, scoring on half of their 18 shots, including 4-5 from three-point range. Hardy led the Tigers with 10 points on perfect 4-4 shooting, including 1-1 from behind the arc.

Turnovers plagued the Lady Tigers throughout the half, as they committed 19 in the opening frame. That allowed Georgia State to take a 34-29 lead into the half, despite only shooting 12-33 (.364) from the field.

The Lady Tigers return to action on Tuesday night as they will take on Winthrop at Littlejohn Coliseum. The game will begin at 5:30 pm as first half of a double-head with the Clemson men’s team.