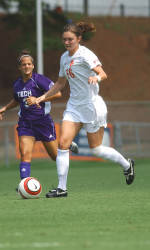 The Lady Tigers will attempt to move on to the Final Four of the NCAA Tournament when they play at Florida State on Friday night at 7:00 PM.

This has never happened in the history of the men’s tournament either. In 1973 Brown won three consecutive matches in overtime to get to the Final Four, wins over UCONN, Yale and Hartwick, but those did not involve penalty kicks. In 1992, Davidson won three rounds in overtime against Charlotte, Coastal Carolina and NC State before losing in overtime to San Diego. In 1999, Santa Clara won three overtime matches in the NCAA Tournament, but not consecutively.

There have been 10 matches decided on penalty kicks in the 2006 NCAA women’s tournament this year, more than any previous year. Clemson has been involved in three of the 10. There were six matches in the 2005 tournament, one in 2004, seven in 2003 and five in 2002.

Clemson also advanced on penalty kicks against Wake Forest in 1999 and had an overtime victory in the NCAA Tournament against Kentucky in 2001.

This Clemson team has not gone away with a loss in seven overtime matches this year. Clemson’s official record in overtime this year is 2-0-5, but three of those ties were in the NCAA Tournament when Clemson won the penalty kicks to advance in the tournament. Clemson had overtime wins during the regular season at Maryland (1-0) and a home match against NC State. Clemson had overtime ties during the regular season at Virginia Tech and at Florida State.