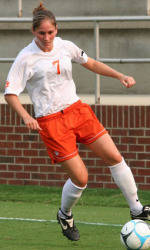 CLEMSON, SC – The 25th-ranked Clemson women’s soccer team will play host to Duke on Saturday night in its final game of the 2007 regular season. The contest between the Lady Tigers and the Blue Devils is scheduled to begin at 7:00 p.m. at Riggs Field. The team will honor its five seniors, Courtney Foster, Amber Funk, Elizabeth Jobe, Ashley Phillips and Nuria Zufia, prior to the game.

The Lady Tigers are 8-4-5 overall and 1-3-5 in the Atlantic Coast Conference. The team suffered a 2-0 loss to 15th-ranked Florida State on Thursday night in Clemson. Seven of Clemson’s nine conference games have advanced to double overtime and the Lady Tigers have a 1-1-5 record in those contests.

On Thursday night, senior All-American goalkeeper Ashley Phillips recorded three saves against the Seminoles and moved into first place in Clemson history for career saves with 307. Phillips has given up just 13 goals in over 1451 minutes in goal in 2007 for a 0.81 goals-against average and has 69 saves and five solo shutouts.

Senior Nuria Zufia leads Clemson in goals with six on the season and has one assist for 13 points. Freshman Samantha Fortier also has 13 points with five goals and three assists. Sophomore Molly Franklin ranks second in the ACC with nine assists and has scored two goals for 13 points on the season.

Duke has an 8-3-6 overall record and a 3-2-4 mark in the ACC. The Blue Devils most recently defeated Miami by a score of 4-2 in Durham. Duke is led in scoring by Elisabeth Redmond with six goals and 11 assists for 23 points on the season. Goalkeeper Allison Lipsher has 70 saves and has allowed 14 goals in 17 games for the Blue Devils.

The Lady Tigers lead the all-time series against Duke with a 10-6 record and are 5-2 against the Blue Devils at Riggs Field. In 2006, Clemson came from behind to defeat the Blue Devils in Durham by a score of 3-2. Down 2-1 with 25 minutes to go in the game, Elizabeth Jobe scored to knot the score at 2-2. Julie Bolt scored the game-winner with less than seven minutes left on the clock and Meghan Smith provided the assist in the Clemson victory.