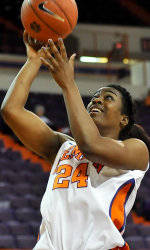 CLEMSON, SC – The Clemson women’s basketball team (6-2) will travel to Birmingham, AL for games with Samford and UAB. Clemson and Samford play on Sunday at 2:00 p.m. CT, and the Tigers and Blazers tangle at 7:00 p.m. CT on Wednesday.

Live stats will be available at ClemsonTigers.com, and live video links can be found in the schedule portion of the page. Both games will also be available live on WCCP-FM 104.9 in the upstate.

The two games will be Clemson’s first games within the state of Alabama since Dec. 19, 1992. The Tigers have not played a game against a team from the state since a 2002 matchup with Auburn.

Senior forward Jasmine Tate will have a homecoming, as she went to high school and grew up less than ten miles from each campus.

Both teams provide a strong challenge, as Samford is off to a 5-2 start and was picked to win the Southern Conference. UAB (5-3) hasn’t played Clemson since 1986-87.

Quick Clemson Notes: * Head Coach Itoro Coleman is in her first season as a head coach. The 2000 graduate of Clemson was most recently at Penn State * This will be the first game Clemson has played in the state of Alabama since Dec. 19, 1992 * The Lady Tigers and Bulldogs have never met on the basketball court. * Clemson’s 5-1 start was their best since the 2003-04 campaign * Clemson leads the ACC in 3-pt % (.402) and is second in 3-pt % defense (.266) * The Lady Tigers won their 350th home game all-time with a 61-49 triumph over Presbyterian College * Defensively, Clemson has held six opponents to 57 or fewer points this season, a feat they accomplished only four times all of last season * The Tigers rank 2nd in the ACC in blocked shots (6.3 per game) behind North Carolina (7.5) * Clemson ranks 24th nationally with a +9.7 rebounding margin and ranks second in the ACC with 30.3 defensive rebounds per game * The Tiger bench accounted for 34 points and 15 rebounds in the win over PC * Clemson has had a better shooting percentage and scored more points in the second half than it did in the first half in each of the last seven games