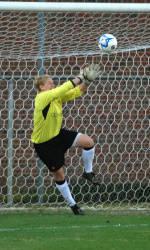 CLEMSON, SC – Clemson goalkeeper Ashley Phillips has been named to the Women’s 2007 Hermann Trophy Watch List. The senior from West Peabody, MA is one of 45 players on the preseason watch list for the Missouri Athletic Club’s Hermann Trophy, which is the most prestigious individual award in intercollegiate soccer.

Phillips helped lead the Lady Tigers to the NCAA Elite Eight in 2006, making NCAA soccer history along the way as the team became the first collegiate soccer team to advance in three NCAA Tournament matches by winning penalty kicks. Phillips was in goal as Clemson tied Vanderbilt (1-1), Oklahoma State (0-0) and Stanford (0-0) before winning by penalty kicks in all three matches.

Phillips enters her senior season needing 67 saves to move into first place in Lady Tiger history for career saves. She recorded 119 saves in 2006, which ranks her first in single season saves by a Clemson goalkeeper. She currently ranks second in Clemson record books for career solo shutouts (16) and career save percentage (.812).

Phillips was named a third-team All-American by the NSCAA and Soccer Buzz in 2006 and was named to the All-Region First Team by both associations. She was a member of the All-ACC Second Team in 2005 and 2006.

Players are selected to the MAC Hermann Trophy Watch List by a committee of Division I coaches who are NSCAA members. In November, the list will be narrowed to 15 semifinalists. Three finalists will be named in early December in conjunction with the NCAA Division I College Cup and will be invited to the Missouri Athletic Club on Friday, January 11, 2008. The winner of the 2007 award will be announced during a nationally-televised news conference that evening. The NSCAA release and the complete 45-member watch list can be viewed on the NSCAA’s website by clicking on the following link: NSCAA Release.

The Lady Tigers will open the 2007 season with two exhibition games, at Davidson on Tuesday, August 21 at 6:00 p.m. and at home against Georgia on Saturday, August 25 at 7:00 p.m. Clemson’s first regular season game will be on Friday, August 31 against Liberty at 5:00 p.m. at Riggs Field.