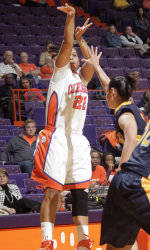 CLEMSON, SC – The Clemson Lady Tigers held their fifth opponent in six games to fewer than 60 points in a 66-44 win over South Carolina State on Sunday afternoon in Littlejohn Coliseum. The Tigers improved to 5-1 for the first time since 2003-04, and only the second time since the 1999-2000 season.

“We’re still learning how to play hard,” said Head Coach Itoro Coleman, who was on the sidelines for the second time this season. “We’re still learning how to compete. I am proud of this team because in the first half, we didn’t play so well. We had some unforced turnovers and were missing a lot of layups. In the second half, I felt like we came out with a little bit more intensity and were able to make the shots that we were supposed to make in the first half.”

Senior Sthefany Thomas had 18 points on 6-11 shooting and tied a career-high with five three-pointers and seven rebounds in the win. Five-foot-seven guard Kelia Shelton led all players with 13 rebounds.

Clemson held the Lady Bulldogs to 27.9% shooting and outrebounded them by a 60-34 margin in the contest. Junior center Kirstyn Wright had 10 points, seven assists, and four rebounds.

Bryelle Smith, who entered the game tops in the conference in minutes played and second in assists/game had six points and seven assists in a team-high 32 minutes.

The Tigers struggled to find their shooting touch in the first half, hitting only 10-29 from the field. It looked as if the Tigers might pull away when they took a 20-9 lead midway in to the first half, but the Bulldogs clawed back to within five at 26-21 with less than four minutes to play. The Tigers hit three free throws toward the end of the half to go in at the break up 29-21.

Clemson had trouble establishing their inside game as the Bulldogs used an active zone to keep the ball out of the lane. As a result, Clemson was only able to score ten points in the paint in the half, but did nail 5-11 from behind the arc.

The Tigers changed that immediately in the second half, getting eight combined points from Pauldo and Jasmine Tate, and the Tigers put up 12 points in the paint in the first five minutes of the half in as part of a 19-5 run that put the Tigers up, 46-26.

The closest the Bulldogs would get the rest of the way was 13 at 46-33, as the Tigers continued to attack the basket, hitting 43.4% of their shots in the half, and were 8-9 from the line.

Serena Clark had five points, including 3-3 from the line, and three rebounds in nine minutes of play.

Clemson returns to action on Thursday night at 7:00 pm as they play host to Indiana in the ACC/Big Ten Challenge.