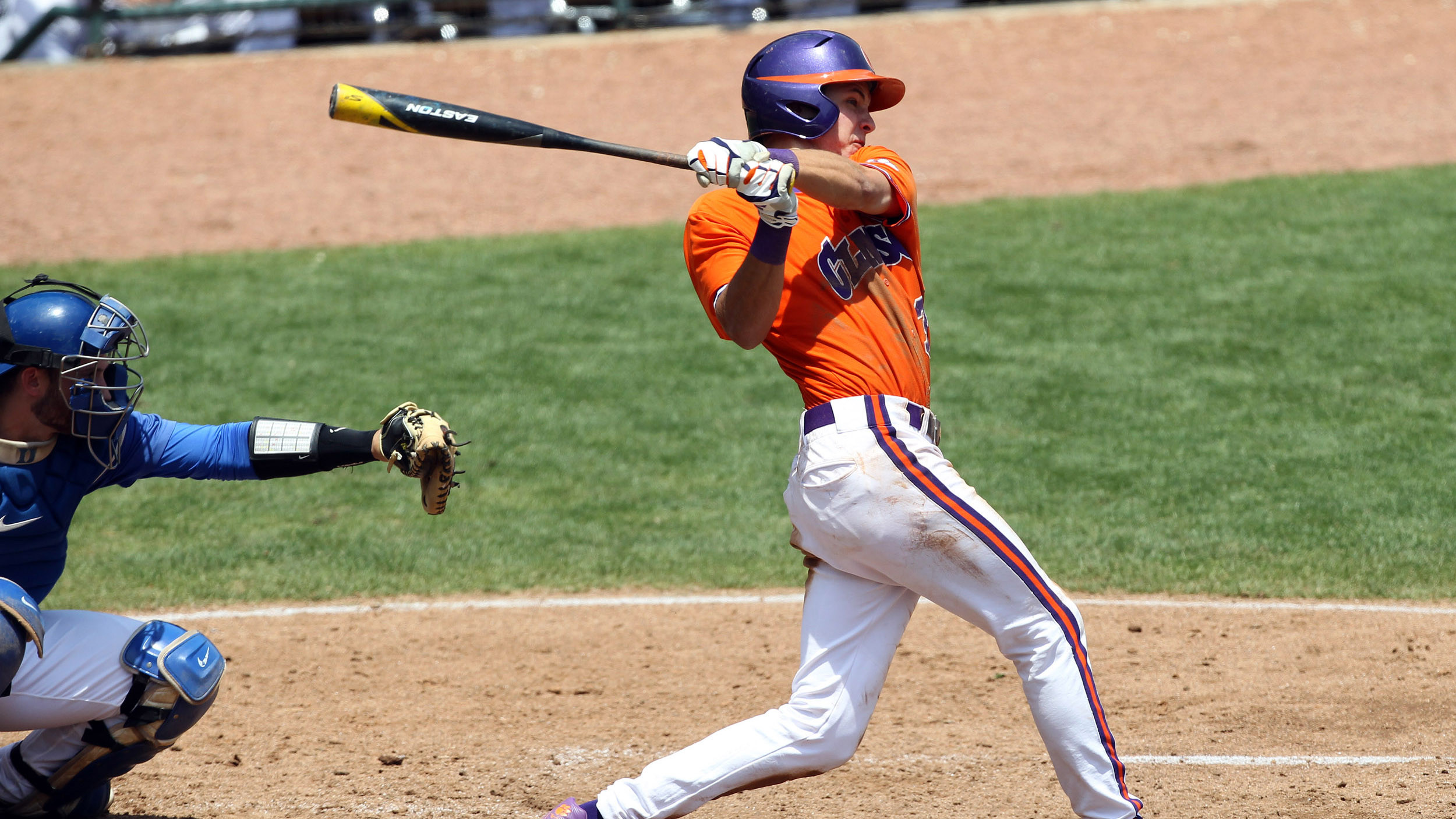 Krieger?s Bat Gets Tigers Off to Good Start in Greensboro

The second time he did not even have to swing it.

Krieger’s two-out, two-run double in the fifth inning gave the Tigers their first lead, and the Blue Devils elected not to pitch to him in the ninth and loaded the bases for Steven Duggar, who made them pay with a two-run single of his own.

“Tyler’s been swinging the bat really well,” said Head Coach Jack Leggett afterward in the bowels of NewBridge Bank Park. He swung the bat well today. He got a hit in the fifth inning, which was a big hit for us.”

For nearly a month, a sore shoulder has prevented Krieger from playing in the field at shortstop, where he started each of the first 101 games of his Tiger career, but it clearly has not bothered him at the plate.

Krieger came into the game fifth in the ACC in hitting at .340 and raised his average by five points with two hits in his three at-bats Wednesday.

“I’m lucky that I can still swing the bat without any pain and help this team in any way,” said Krieger. “I love playing with these guys and I love being able to still get a chance in the lineup.”

The Tigers looked to have taken an early lead in the first inning when Krieger came around from second and beat the throw home on a two-out Duke throwing error on Steve Wilkerson‘s grounder. But it was ruled Krieger missed the plate with his slide, and he was tagged out by catcher Mike Rosenfeld.

The Blue Devils took the game’s first lead in the bottom half, as Ryan Deitrich’s two-out, two-run shot made it 2-0.

The Tigers finally started getting good swings against Duke starter Michael Matuella in the fourth and strung together three straight hits, with Garrett Boulware‘s liner into center field scoring Duggar.

Clemson continued to square up Matuella’s fastball in the fifth, and it finally cashed in. With Chris Okey and Weston Wilson on base after back-to-back singles, Krieger ripped a two-out, two-run double into the right-field corner to score both and give the Tigers their first lead at 3-2.

“Our gameplan going in was we were going to have to be aggressive and get on the fastball and really make sure our swings were crisp,” stated Krieger. “Anytime you see a pitcher the second time through, you’re going to gain a better idea of what he’s got. We just seemed to make the adjustment and get the big hit when we needed it.”

Despite giving up the second-inning home run, Clemson starter Matthew Crownover said he was confident in the Tigers’ chances after Krieger’s hit.

The sophomore lefty worked 7.2 innings and gave up just five hits before giving way to Drew Moyer to get the final out in the eighth.

“All along the way, Matthew Crownover was excellent for us,” said Leggett. “He had nine strikeouts, one walk and was around the plate all day long. He’s been pitching like that for us all year long and battles all the time.”

In the ninth, with two men in scoring position and one out, Krieger came to the plate again, but the Blue Devils elected to take their chances with Duggar instead. After walking Krieger to load the bases, Duggar singled through the right side of the infield to score two important insurance runs.

“Krieger is a tough offensive player for us, so I understand what they were thinking to get to Duggar,” Leggett said. “But Duggar is also a clutch player for us, and he’s got a lot of savvy about him. It was a big hit for us.”

Things still got interesting in the ninth, as the Blue Devils put the tying run on first base and Rosenfeld lined a ball into the right-center gap that looked like it might tie the score.

But Tyler Slaton tracked the ball down to end the contest and send the Tigers into Thursday’s 7 p.m. tilt with No. 1 seed Miami (Fla.) unbeaten in the tourney.

Clutch hitting can be an elusive thing in the game of baseball, but after rallying from a five-run deficit in the ninth inning to close the regular season against Boston College, Clemson appears to be rounding into form at the right time.

“I’ve always thought we had a really good baseball team,” added Leggett. “We won a big game the other day, and I think that gave us a lot of momentum and some confidence in what we’re doing. We’ve played a really tough schedule along the way, and this was another tough game. But I’ve always believed in this team.”