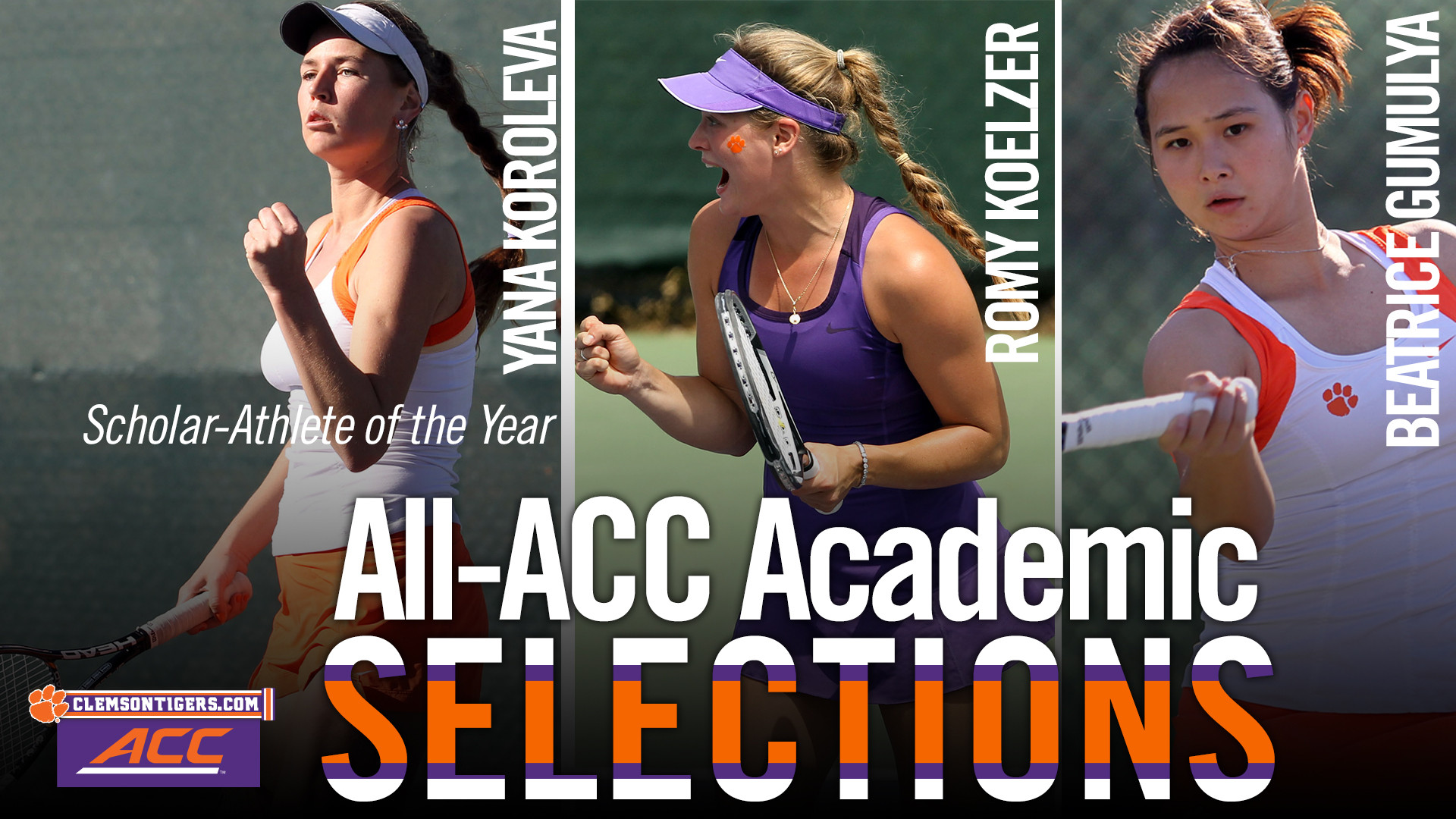 GREENSBORO, N.C. – The Atlantic Coast Conference released the 2014 All-ACC Academic Women’s Tennis Team on Wednesday, with May graduate Yana Koroleva earning the nod as the Women’s Tennis Scholar-Athlete of the Year for the second consecutive season. All-ACC performers Romy Koelzer and Beatrice Gumulya also earned spots on the academic team for the first time. Clemson tied with Miami for the most academic selections this season.  Koroleva becomes the first Clemson student-athlete in any sport to be named as the Scholar-Athlete of the Year twice since the award was introduced in 2007. Koroleva earned a 3.81 this year and graduated in just three years, earning a degree in communication studies. She finished the season ranked 34th in the nation in singles, and 18th in doubles with Gumulya, and was a Second-Team All-ACC performer on the court.  Koroleva, at home in Moscow, Russia for the summer, added: “I’m very happy to be acknowledged with an honor like this again. It just shows that its not only all about what you do on the court, but also in classroom. Clemson has great academic support staff – advisers, tutors – the whole team that helps you learn how to manage your time and studies. Of course a lot of credit for this award must go to them! For me, its a cool way to finish my career in Clemson and I know that we have a lot of great student-athletes in Clemson. I hope that next year one of my teammates will join the club and keep the award with the Tigers!” Koelzer, a Third-Team All-ACC selection is a communication studies major, who earned a perfect-4.0 in her junior year, while finishing ranked 33rd in the nation in singles. Gumulya, also a Third-Team All-ACC selection earns her first honor after capturing a 3.39 in parks, recreation and tourism management.  The women’s tennis program put together one of the most successful on-and-off-court seasons in school history. The program recorded a 3.43 GPA in the spring semester, while also tying for the ACC regular season championship and advancing to the NCAA Round of 16.   About the Awards: The ACC Scholar-Athlete of the Year awards were established in September 2007 to be awarded annually to the top junior or senior student-athlete in their respective sports. Candidates for the awards must have maintained a 3.0 grade point average for their career as well as a 3.0 for each of the last two semesters. To be eligible for consideration for the All-ACC Academic Team, a student-athlete must have earned a 3.00 grade point average for the previous semester and maintained a 3.00 cumulative average during his academic career.