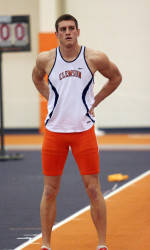 Three members of Clemson’s men’s track & field team completed the final three events at the JRF Multi-Event Challenge on Saturday. Brent LaRue of Wake Forest won the heptathlon in close fashion, totaling 5,480 points. He was just two points ahead of runner-up Michael Morrison (Florida) and only 19 ahead of the Tigers’ Ryan Koontz.

Koontz posted 5,469 points, which was not his personal best, but it was enough to qualify him provisionally for the NCAA Indoor Championships. He started off Saturday strong by placing second in the 60m hurdles with a time of 8.14. He also tied for third among the heptathletes in the pole vault. He had a 14’11.25″ clearance. He finished the competition with a time of 2:53.99 in the 1000m run. Koontz is the defending ACC Champion in the heptathlon.

Joey O’Rourke finished with a total of 3,904 points in his first-ever heptathlon. The red-shirt freshman from Mt. Pleasant, SC was hampered by no height recorded in the pole vault. He had a time of 8.63 in the 60m high hurdles on Saturday.