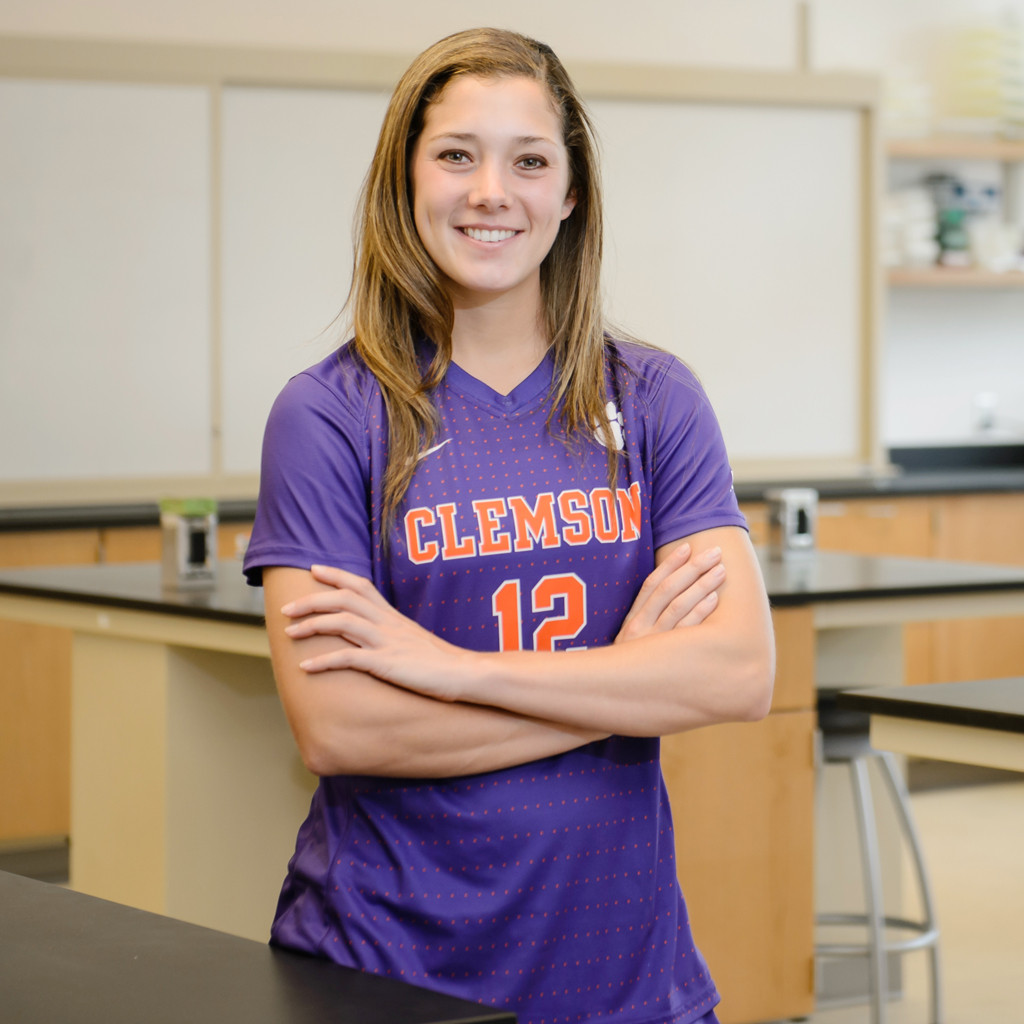 As the leaves were beginning to fall and starting to turn anywhere from brown to red to a Clemson orange in the fall of 2011, the Clemson women’s soccer team was putting the final touches on another season, albeit one without an NCAA Tournament appearance. In the regular season finale against Francis Marion that year, in what would turn out to be a 4-0 victory for the Tigers on Senior Day, a freshman midfielder from Cary, N.C., poked one into the back of the net midway through the match for the first goal of her collegiate career.

Three years later, Katelyn Reeve can look back on all that she has accomplished in her Clemson career, and while much has been learned and obtained, she admits there is still plenty more on the horizon for her and the Tigers.

That freshman year, Reeve started nine matches and saw the field in 16 contests. This came after a high school career that saw her named all-conference as both a soccer player and a track & field runner.

She started all 19 matches at midfield for the Tigers in 2013, tallying over 1,300 minutes. Reeve has never been one of the flashier players on the team, as she only had six total points heading into her senior season. But she has certainly served as one of the integral pieces of the program. A two-time co-captain, she took on the label and has accepted the role that this opportunity has given her.

“I’ve matured a little more as a leader,” Reeve said. “People expected me to step up as a leader on the team. I never would have thought that about myself coming in as a freshman.”

Looking back, Reeve admits that she and her teammates experienced a few rough patches, but that they are all the better for it now.

“I think I bring the experience I had my freshman and sophomore years, the struggle that we had to go through,” she said. “We didn’t really start off well. Coach (Radwanski) was new, so my class kind of turned the program around and adopted a different culture. We started from new, and we’re finally getting to the point where we’re seeing that success on the field.”

That success included a quick start to the 2014 season. The Tigers outscored their first four opponents by a margin of 16-2. Radwanski’s club also was victor in two August exhibition matches by scores of 3-0 and 2-0. Reeve points out the team’s chemistry as one of its strongest traits in the early season.

“We have good team chemistry, and we’re all on the same page,” she said. “The fact that we’ve all been here all summer and we’ve been training all summer — it says we have the same goals.”

As for her own personal goals? She pauses for a minute after the question is asked.

“NCAA Tournament,” she says with a big smile — smiling almost as if she knows something that you don’t. “Yeah. I want to make the tournament. That’s the main thing.”

Reeve explains all this as we sit down for an interview in the McFadden Building lobby on a Tuesday morning at 8:30. She had already been up and completed 6 a.m. workouts. As an aside, she explains that one of her favorite things to do is to run (“Yeah. That’s my thing.”). Needless to say, she stays active. When asked about her favorite hobbies outside of soccer, she gave this immediate response with a chuckle:

“You mean outside of school?”

Go ahead and chalk down devoted scholar as a character trait of hers as well.

As it pertains to the “athlete” portion of the “student-athlete” equation, Reeve was named to the Dean’s List for both the fall and spring semesters her freshman year. The following fall, she made the jump to President’s List, a distinction she has proudly earned every semester since. Last fall, the biological sciences major was named to the All-ACC Academic Team.

Reeve will be graduating a semester early this December, and is excited about the possibilities that await her. As a certified nursing assistant, she will be taking a semester off after graduation, and by “off” she means working the 2,000 hours necessary to, in April, put those hours towards applying for physician assistant school. She then plans to do that for two years.

Meanwhile, Reeve is focused on winning matches for her team, her teammates, her coaches, the University, and the Clemson Family. She pauses again when asked what that term, “Clemson Family,” means to her, but you can tell it is because she wants to get the answer precisely right.

Big things await Katelyn Reeve. But for the here and now, she has her mind set on certain goals, like leading Clemson to postseason play and making an impact on the program before she leaves. And as she learned from early on, goals are a good thing.