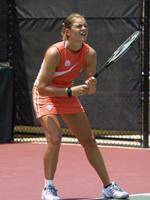 Clemson senior Julie Coin will participate in the ITA National Intercollegiate Indoor Championships on Nov. 4-7. The University of Michigan will host this year’s tournament in Ann Arbor, MI. Coin will begin play in singles competition on Thursday.

The Amiens, France native qualified for the field of 32 after reaching the semifinals of the Riviera/ITA All-American Championships in early October. In her first round match at the Riviera/ITA All-American Championships, Coin defeated 15th-ranked Megan Muth of William & Mary by a score of 6-2, 6-2. She advanced to the quarterfinals after UNLV’s Elena Gancheva retired in the Round of 16 due to an injury. Coin then beat Nicole Leimback of Southern California (6-1, 6-4) before falling to the eventual champion Audra Cohn of Northwestern (6-1, 6-4) in the semifinals. Coin boasts a 6-1 record during the fall season and is ranked fourth in the preseason ITA singles poll.

Coin will face 23rd-ranked Shadisha Robinson of Georgia in the opening round of the indoor championships.

The semifinal and final rounds of the championships held on Saturday and Sunday will be broadcast over the Internet at www.RadioTennis.com.