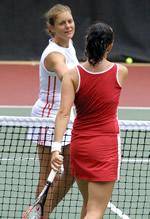 ATHENS, GA – Clemson’s Julie Coin upset the second-seeded player in the NCAA Singles Championships on Wednesday in Athens, GA in the Round of 16 to advance to the tournament’s Elite Eight. Coin is just the third women’s tennis player in Tiger history to reach the final eight in the NCAA Singles Tournament. Gigi Fernandez (1983) and Sophie Woorons (1996) are the only other Tigers to accomplish that feat. Woorons ultimately fell in the Final Four in 1996, while Fernandez was the national runner up in singles in 1983.

Coin, a junior from Amiens, France, upset the tournament’s second-seeded singles player and fifth-ranked Anda Perianu of Oklahoma, by a score of 6-4, 4-6, 7-6(4) on Wednesday afternoon at the Dan Magill Tennis Complex on the campus of the University of Georgia. With the win, Coin, currently ranked sixth by the ITA in singles, improves to 31-8 overall. The victory over fifth-ranked Perianu is Coin’s first victory over a top-five ranked opponent and improves her record against ranked players to 18-5 on the season.

In Thursday’s 1:00 p.m. Elite Eight match, Coin will face Northwestern’s Cristelle Grier, who is the eighth-seeded player in the tournament and the ITA’s third-ranked player. Coin defeated New Mexico’s 74th-ranked Maja Kovacek by a score of 6-3, 6-0 in the Round of 32 and posted a first round victory over #48 Sarah Foster of Kentucky (6-4, 6-0). Grier posted wins over Stanford’s Lauren Barnikow (#56), North Carolina’s Aniela Mojzis (#21) and Arizona’s Dianne Hollands (#11) en route to the final eight.

Coin and Maria Brito, a freshman from Mexico City, Mexico, fell to fifth-seeded Grier and Jessica Rush of Northwestern in the Round of 16 of the NCAA Doubles Tournament on Wednesday afternoon by a score of 3-6, 6-3, 2-6. In the first round of the tournament, Brito and Coin defeated Wisconsin’s Lindsay Martin and Katie McGaffigan by a score of 6-3, 6-3 to become only the third doubles team in Tiger history to reach the Round of 16, and the first since the 1986 season. The pair, currently ranked 13th by the ITA, finishes the season with a 25-6 overall record in doubles play.