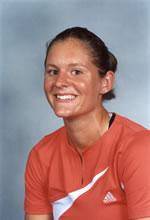 CLEMSON, SC – Tiger women’s tennis player Julie Coin was named the Atlantic Coast Conference Women’s Tennis Performer of the Week for the week of April 5, 2004 after going undefeated in singles and doubles play last week. This is the third time this season that the junior from Amiens, France has earned the conference weekly honor, as she was also named ACC Performer of the Week for the weeks of February 23 and March 8.

In Clemson’s 4-3 victory over Georgia Tech, Coin, ranked ninth by the ITA in singles, defeated #43 Lyndsay Shosho by a score of 4-6, 6-2, 6-1. In doubles action, Coin teamed up with Alix Lacelarie at the number two position for a 9-8(0) win over the Yellow Jackets’ Maria Nieto and Shosho.

Against 30th-ranked Florida State, Coin helped the 21st-ranked Tigers to a 4-3 win and extended the team’s conference record to 6-0. At flight one singles, Coin took a straight-set victory over Anca Dumitrescu by a score of 6-1, 6-3, improving to 6-0 in ACC singles play. Coin and Lacelarie teamed up at flight one doubles to defeat the Seminoles’ Roxanne Clarke and Mihaela Moldovan by a score of 9-8(5).