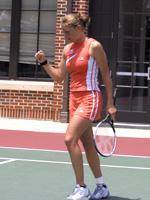 ATHENS, GA – The Tigers’ Julie Coin posted her second consecutive upset over a top-eight seeded singles player on Thursday to advance to the Final Four of the NCAA Singles Championships. With the win, Coin improved to 32-8 overall in singles, which is the most victories recorded by a Tiger women’s tennis player since Ingelise Driehuis finished the 1987 season with 42 wins.

In Thursday’s quarterfinal match, Coin upset eighth-seeded Cristelle Grier of Northwestern in three sets (7-5, 4-6, 6-1) to improve to 32-8 on the season. With the win over Grier, currently ranked third by the ITA, sixth-ranked Coin posted her second consecutive victory over a top-five ranked singles player. She upset second-seeded and fifth-ranked Anda Perianu of Oklahoma (6-4, 4-6, 7-6(4)) in the Round of 16 on Wednesday and posted wins over #48 Sarah Foster of Kentucky (6-4, 6-0) and #74 Maja Kovacek of New Mexico (6-3, 6-0) in the first and second rounds, respectively. Coin is now 19-5 overall against ranked players this season.

The junior from Amiens, France will face Amber Liu of Stanford, the defending NCAA Singles Champion, in the Final Four on Friday at 1:00 p.m. at the Dan Magill Tennis Complex on the campus of the University of Georgia. Liu, a sophomore from La Mesa, CA, is the fourth-seeded player in the singles tournament and is currently ranked seventh by the ITA. She defeated Vanderbilt’s Audra Falk by a score of 6-1, 6-3 in her quarterfinal match on Thursday. Coin is the only non-top-eight seeded player in the Final Four, as third-seeded Jelena Pandzic of Fresno State and sixth-seeded Megan Bradley of Miami (FL) will face off in Friday’s other semifinal match.

Coin is just the third women’s tennis player in Tiger history to reach the Final Four of the NCAA Singles Tournament. Gigi Fernandez and Sophie Woorons are the only other Tigers to accomplish that feat. Woorons fell in the Final Four in 1996, while Fernandez was the national runner up in singles in 1983.

In the 2004 NCAA Doubles Tournament, Coin and freshman Maria Brito fell to Northwestern’s Grier and Jessica Rush in the Round of 16 on Wednesday evening by a score of 3-6, 6-3, 2-6. The pair defeated Wisconsin’s Lindsay Martin and Katie McGaffigan by a score of 6-3, 6-3 on Tuesday to advance to the second round. They finish the season with a 25-6 overall record in doubles play.