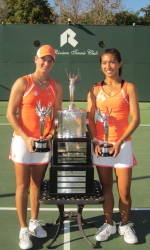 PACIFIC PALISADES, CA – Clemson juniors Josipa Bek and Keri Wong, ranked fifth in the nation, fell in the Riviera ITA All-American finals to No. 2 Hilary Barte and Mallory Burdette of Stanford, 6-3, 6-3 on Sunday. The All-American Championships feature many of the nation’s top players, and Bek and Wong defeated three top-20 teams on their way to the finals.

The Riviera ITA All-American Championship is considered one of the “Grand Slam” events of collegiate tennis, along with the USTA/ITA National Indoor Championships and the NCAA Championships.

Bek and Wong put together an impressive run, knocking off several of the nation’s top teams. They defeated #18 Allie Will and Sofie Oyen of Florida, 8-6, in the main draw first round before dispatching #32 Kim van Ginkel and Simona Synkova of Wyoming in the second round.

They then defeated #15 Kristi Boxx and Abby Guthrie of Ole Miss, 8-4, and advanced to the finals with a tiebreaker win over #19 Ellah Nze and Nadine Fahoum of Duke, 9-8(3).

The Tiger duo will return to Clemson to prepare for the ITA Carolina Regional Championships, which take place in Winston Salem beginning October 22. Bek is the two-time reigning singles champion in the event.