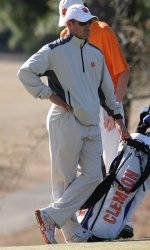 CLEMSON, SC – Clemson assistant golf coach Jordan Byrd has been named one of 10 semifinalists for the 2010 Jan Strickland Award presented by TaylorMade-adidas Golf as selected by the GCAA. The Strickland Award is presented to the NCAA Division I, II, III, NAIA or NJCAA assistant coach that, among other things, has excelled in working with their student-athletes both on the course and in the classroom.

Byrd is in his fifth season as Kyle Stanley to Clemson. He twice finished as a runner-up at the NCAA Tournament.

The program has also had academic success during his tenure. Ben Martin, a Clemson graduate in his final year of eligibility with the program in 2010, was recently honored by the ACC as a recipient of a Weaver-James-Corrigan Scholarship. Martin will be chosen to the Academic All-ACC team for the fourth straight year this season. Clemson’s team GPA for the first semester this year was 3.01.

Finalists for the Strickland Award – which has been sponsored by TaylorMade-adidas Golf since its inception in 2003 – will be named on May 12 with the recipient announced June 1. The Strickland Award recipient will have the opportunity to further his professional development by receiving an invitation to the TaylorMade-adidas Golf Kingdom in Carlsbad, Calif.