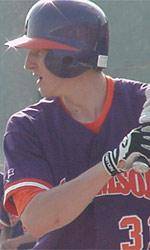 CLEMSON, SC – Michael Johnson launched two home runs for the second game in a row to headline Clemson’s 12-1 victory over College of Charleston on Wednesday afternoon. Clemson (7-0) remained undefeated while beating the Cougars (10-3) for the second time in four games.

College of Charleston had the first chance to score in the third inning, but Clemson starter Ryan Childs got out of a bases-loaded jam unscathed. The Tigers scored three runs in the bottom of the inning to take an early lead thanks to RBIs from Collin Mahoney, Kyle Frank and Khalil Greene. They broke it open in the fifth inning with four runs, including a towering, three-run blast to right field by Johnson.

Johnson struck again in the eighth inning with his team leading 9-1. He hit a two-run home run, this time to left field, for his sixth home run of the year. Johnson homered twice against South Carolina on Sunday and once against the Gamecocks on Saturday. He homered five times in the last six games of 2001, which gives the first baseman 11 home runs in his last 13 games dating back to last season.

Childs (1-0) earned the win for Clemson by pitching five shutout innings and allowing only two hits. Charlie Wentzky (2-2) got the loss for the College of Charleston.

Clemson will take on Purdue at 4:00 PM on Friday in the first of three games between the two teams this weekend.