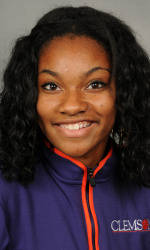 Johnson earned the indoor/outdoor sweep of the award for a second straight season after guiding the Clemson women’s team to a dominant performance at the ACC Championships in April. His team won by a +69.5-point advantage and totaled 202 points at the outdoor conference meet, the first team to score at least 200 points since the ACC moved to a 12-team format in 2005. Johnson’s team produced seven event champions, including the 4×100-meter relay. He coached the meet MVPs for both track and field events in Stormy Kendrick and Sinkler, respectively. His women’s team is currently No. 6 in the USTFCCCA computer ratings heading into this week’s NCAA Outdoor Championships in Des Moines, IA.

Sinkler also earned the indoor/outdoor sweep for the second straight year, giving her a total of four Southeast Region individual accolades. She won the ACC high jump crown, her seventh individual title, and was runner-up at the conference meet in the long jump. Sinkler qualified for this week’s NCAA Championships in all three of her events – the high jump, long jump and triple jump. The school record-holder in the high jump and long jump, Sinkler is the owner of 11 All-ACC accolades in her decorated career.