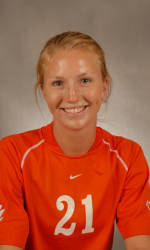 CLEMSON, SC – Two members of the Lady Tiger soccer team were named to the 2007 ESPN The Magazine Academic All-District Women’s Soccer Team as selected by the College Sports Information Directors of America. Molly Johnson was named to the all-district first team and Elizabeth Jobe earned second-team honors for District 3.

Johnson, a junior defender, has played a major role for the Lady Tiger defense in 2007, which has allowed just 20 goals in 19 games on the season. The Stuart, FL native has netted two goals this season, including the game-winning header for Clemson in the team’s 1-0 double-overtime victory over Maryland. Johnson has a 3.95 cumulative grade point average in Marketing.

Jobe, a senior from Roswell, GA, has also helped anchor the Clemson defense that has held its opponents to just 20 goals in 2007. Jobe has seen action on defense and in the midfield and has posted four goals and two assists for 10 points this season. She netted the game-winning goal in the Lady Tigers’ 1-0 win over Duke on Senior Day. The Animal & Veterinary Science major boasts a 3.95 cumulative grade point average. Jobe will graduate from Clemson in December and plans to attend veterinary school in the fall of 2008.