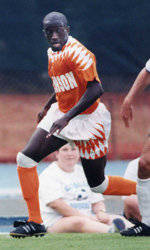 John Wilson to Play for the Charleston Battery

Wilson began his pro career with the Charleston Battery in 1999. In 2000 Wilson left for a one-year stint with Major League Soccer’s Kansas City Wizards but returned to Charleston for the 2001, 2002 and 2003 seasons; his career Battery totals include 116 games played (3rd all-time) with one goal and six assists.

A native of Seneca, SC, Wilson spent the 2004 season with Battery rival the Rochester Raging Rhinos then in May 2005 joined MLS’s DC United. Wilson played 29 games for DC but after struggling with injury in 2007 was waived in June.

Prior to turning pro Wilson was a four-year starter at Clemson University, scoring 18 goals with 27 assists in 80 games played.