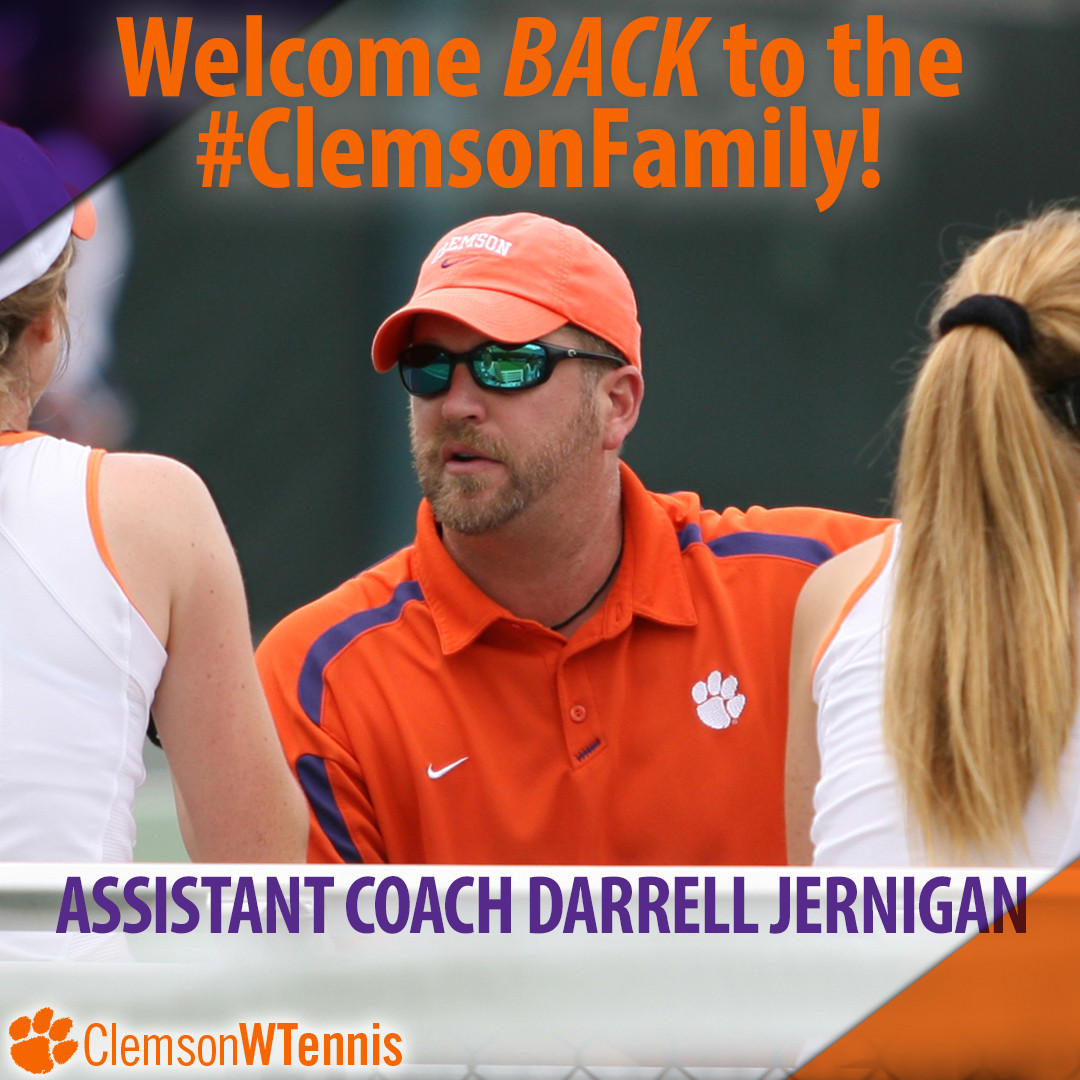 CLEMSON, S.C. – Darrell Jernigan has joined the Clemson women’s tennis staff as an assistant coach, as announced by Head Coach Nancy Harris on Thursday. This is Jernigan’s second stint with the program, as he previously served as an assistant coach for the Tigers from 2005-10. Jernigan replaces Maria Brito, who was named the head coach of the Tulane women’s tennis program earlier this month.

“When I think of Coach Darrell Jernigan, I think about the impact he will have on our team and the support he will give to each individual player, and to our staff members,” said Harris. “Darrell understands the needs and desires, as well as the challenges our student-athletes face in this highly competitive environment of the Atlantic Coast Conference.

“I am excited to welcome Darrell back to Clemson women’s tennis. As my former assistant coach, he helped this program achieve an ACC title, a national ranking of No. 3 and numerous NCAA Sweet 16 performances. Darrell has many accolades in our sport, but more importantly, he will be a ‘rock’ for our team to continue to build, to grow and to reach our potential.”

Jernigan returns to Clemson after spending the past four seasons as the Head Men’s & Women’s Tennis Coach at Southern Wesleyan University. Jernigan’s tenure at SWU began in 2013, coinciding with the first year of the men’s and women’s tennis program at the school. He was in charge of all aspects of the Warriors’ tennis program, and also oversaw the construction of the Lecroy Cox Tennis Center, a new, six-court, on-campus tennis facility.

“I am so thankful and excited to be back with Clemson University and Coach Harris again,” said Jernigan. “This university and tennis program hold a special place in my heart and the opportunity to return was one I could not pass up. Coach Harris and I have a tremendous working relationship and we both have a great understanding that the focus must be on supporting the players on and off the court.”

During his first stint at Clemson from 2005-10, Jernigan helped lead the Tigers to the NCAA Sweet 16 four out of five seasons, as well as to two ACC Championship titles (regular season in 2007 and tournament in 2008). Two Tigers earned All-America honors and six earned All-ACC honors during his tenure, including Ani Mijacika, who was the ITA’s No. 1 ranked singles player two years in a row with Jernigan as her coach. He was named the ITA Southeast Region Assistant Coach of the Year in 2008.

From 2010 to the present, Jernigan taught AP Biology and Biology I Honor classes at Seneca High School. Earlier in his career, from 2000-05, he taught biology and coached men’s tennis at West-Oak High School.

Jernigan is familiar with both Clemson and the upstate of South Carolina. A 1991 graduate of Seneca High School, he played tennis at North Greenville University from 1991-93 where he earned an associate degree in biology. He went on to play at Winthrop from 1993-94. Jernigan graduated from Clemson in 2000 with a degree in Biological Sciences. He later earned a master’s degree in Youth Education & Leadership from Clemson in 2011.