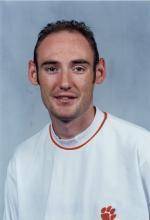 TERRE HAUTE, IN – Jason Meany and Scott Shaw competed at the 2002 NCAA Cross Country Championships held this afternoon at the LaVern Gibson Championship Cross Country Course. Meany and Shaw were the first Tiger harriers to represent Clemson at the NCAA Championship meet since 1998 when Joe Gibson ran at the national meet in Kansas. Of the 254 runners that started this year’s race, Meany finished 48th, while Shaw posted a 75th-place finish.

Meany, a senior from Liverpool, NY, covered the 10K course in a time of 30:40.9, while junior Scott Shaw, from East Syracuse, NY, posted a time of 30:56. 8. Meany was named the 2002 Southeast Region Runner of the Year after winning the Southeast Region meet, and was a member of the 2002 All-ACC team. Shaw finished third at the region meet to earn all-region accolades and automatically advance to the NCAA Championships. Shaw was also a three-time ACC Performer of the Week during the regular season.

“Jason and Scott have had a fantastic season and they ended it on a good note,” said head coach Bob Pollock. “I am extremely proud of how they competed and what they have accomplished this season.”