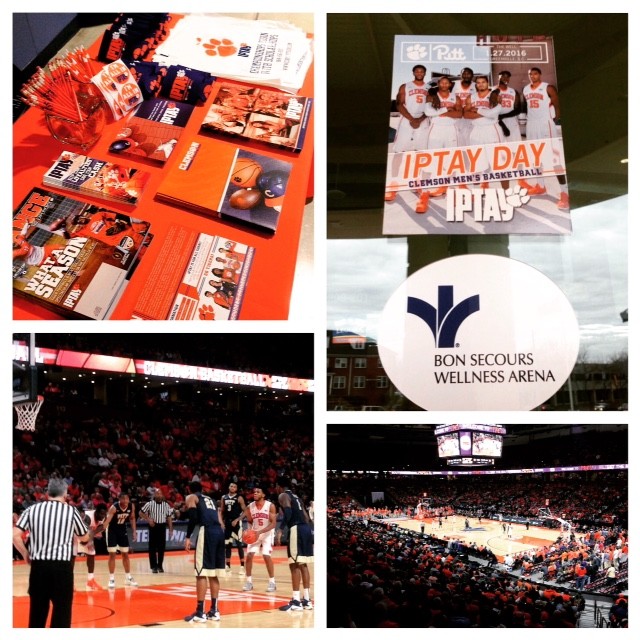 This past Wednesday night, Coach Brad Brownell and the men’s basketball team knocked off ACC foe Pittsburgh on IPTAY Day at the Bon Secours Wellness Arena in downtown Greenville. With the victory, the Tigers notched their sixth ACC win of the season and thirteenth overall. The Clemson Family turned out as a fantastic crowd filled the arena. The support that our programs see is outstanding and we appreciate all of those who made it out to the game.

To see a complete recap of the men’s basketball game vs. Pittsburgh, click HERE.

Here at IPTAY we are continuing to find ways to both thank our current donors as well as market the IPTAY brand to potential donors. There’s no better place to do that than at our own athletic events.  The one night event in Greenville allowed IPTAY to have increased signage at the Bons Secours Wellness Arena that was visible to both fans in attendance as well as those watching on TV. Fans in attendance had the opportunity to brush up on their IPTAY knowledge including what IPTAY supports, IPTAY history, IPTAY membership numbers and more during various intermissions throughout the evening.

Fans also had the opportunity to stop by the mobile IPTAY office located at the Clemson Entrance to pick up IPTAY information, ask questions, as well as take home a souvenir.  All members or potential new members were able to renew, complete 50% of their pledge, or join for IPTAY 2016 on site. Patrons could also enter to win a Nike gear package that featured signed basketballs by Head Men’s Basketball Coach Brad Brownell. We hope that all fans had a great time and found something special on the table to take home with them.

IPTAY members who attended the game enjoyed additional benefits. Members who presented their IPTAY membership card at the mobile office on the concourse were given special IPTAY sunglass straps to take home.

Again, we want to thank those in attendance and all of our IPTAY donors. Because of your support, IPTAY is able to provide the total athletic and academic experience to our nearly 500 student-athletes. If you are not yet a member of the IPTAY team, there is no better time to join! To learn more about IPTAY and how to join, click HERE.

If you were unable to make it to the Well, you still have a chance to attend an IPTAY Day this spring! On Saturday, April 30, IPTAY will be heading to Doug Kingsmore Stadium as our Baseball Tigers take on Florida State. First pitch is set for 6:30 p.m.