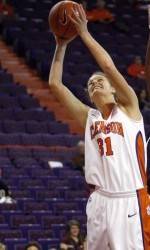 CLEMSON, SC – Clemson went on a 12-2 run to cut a 12-point deficit to two with eight minutes to play, but couldn’t get over the hump as Indiana pulled away for a 65-51 victory in Littlejohn Coliseum in the ACC/Big Ten Challenge on Thursday night. The loss drops the Lady Tigers to 5-2 on the young season, while Indiana improves to 4-3.

The Hoosiers denied Clemson of a 350th all-time win in Littlejohn Coliseum, a milestone that Itoro Coleman and the Lady Tigers will try for on Sunday at 2:00 pm against Presbyterian.

Clemson is now 2-2 all-time in the women’s basketball ACC/Big Ten Challenge, and falls to 1-1 against Indiana all-time, whom they had not played since Dec. 20, 1979. In the overall Challenge, the ACC has won three straight.

The Lady Tigers entered the game ranked third nationally in three-point percentage, but hit just 3-18 in the game, and 1-10 in the second half. Leading scorer Sthefany Thomas was held to just two points, snapping her streak of ten straight in double figures.

Jasmine Tate had eight points and pulled down eleven boards. The Lady Tiger offense sputtered against Indiana’s matchup zone to the tune of 31.0% shooting, including 16.7% from behind the arc.

However, the Hoosiers were able to knock down 14 jump shots outside of the paint, while Clemson was only able to hit four. The Hoosiers we also able to force 23 turnovers, and Jori Davis led all players with 17 points.

Indiana went into the break with a 29-23 advantage. The teams traded hoops for five lead changes in the early going, but a 9-0 first half run gave the Hoosiers a cushion that they would not ultimately relinquish.

Clemson closed the gap to three at 26-23 with a minute to go in the half, but a Aulani Sinclair three pointer with just under a minute held the six-point edge.

Indiana looked as if they might pull away in the second half when a Whitney Lindsay three gave them a 46-34 lead with 12:40 to play, but a furious 12-2 run pulled Clemson to within two at 48-46. The Tigers had the opportunity to take the lead, but a pair of Kelia Shelton threes and a Mason layup were off the mark on the possession.

The teams traded baskets, but it Indiana clinging to a 50-48 lead, they dug in on defense and held Clemson to one point over the next 7:30 of clock, going on a 15-1 run. The Tigers missed nine consecutive shots and turned it over four times during the run.