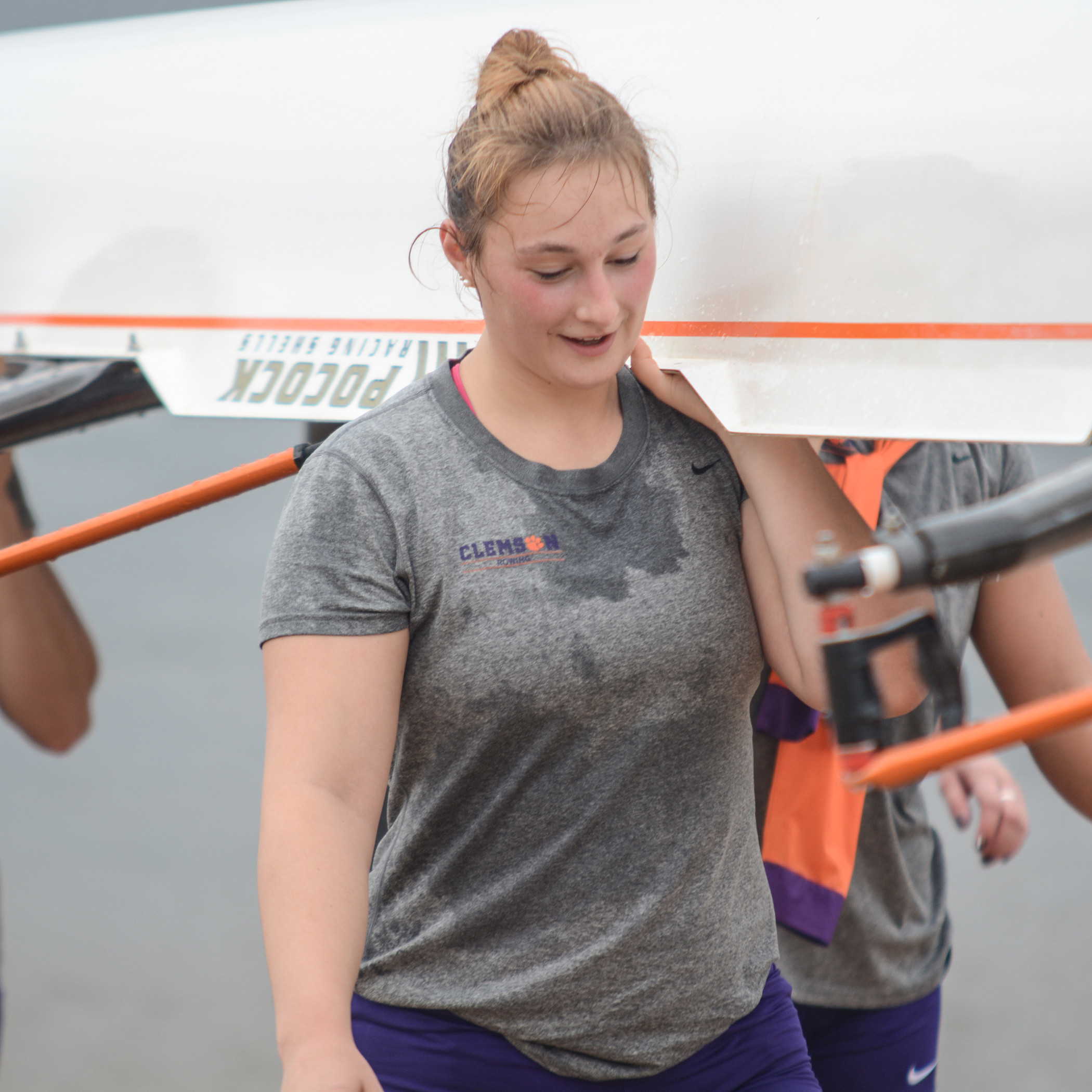 Heuer, a native of Germany, is heading into her final season as a member of Clemson’s rowing team. She first heard about Clemson while competing at an international regatta in Munich.

“I didn’t know anything about Clemson before I came,” admitted Heuer. “I had never heard of it. I had never thought about going to America with a rowing scholarship. When I came here, I really liked the nice facilities, the big team and working out with so many girls. At home, I often had to practice alone.”

Although not as prevalent in the United States, rowing is extremely popular in Europe, especially in Germany. Growing up in a city near the water and surrounded by rivers, Heuer was bound to end up in a boat.

She has been rowing for nearly 11 years since she picked up the sport when all her friends were rowing. While the sport is the same, the culture surrounding it in the two countries is vastly different.

“In Germany, you start earlier and in smaller boats. If you’re good, you keep going because it’s fun, winning and competing. In America, it’s more about the team, and in Germany, it’s about the individual.”

When Heuer talks about her time at Clemson, one of the recurring themes woven into her experience should come as no surprise to anyone who has been a part of Clemson…family.

“I really like this family feeling in Clemson,” said Heuer. “I have friends in studio, we hang out so much and we have spent so much time together. But also with the rowing team, we see each other every day. Professors, coaches, teammates…everyone is very supportive.”

Rowing is not an easy sport by any means. It requires strength, coordination and a lot early mornings. It is even harder for Heuer, who sustained a back injury at the age of 18 while competing for the German National Team in a silver-medal performance. It is an injury that still bothers her to this day.

“We’re all not divas. We have really sore hands, blisters everywhere. We have to be tough to do that, to go out in the rain and the snow and the cold, in the morning in the freezing weather.”

If being a student-athlete from a foreign country is not challenging enough, Heuer also pushes herself in the classroom. She is an architecture major, one of the most time-intensive programs at Clemson. Outside of their lengthy classes, students spend hours in studio working on their next designs.

While Heuer is not entirely sure what she wants to pursue after college, she is hoping to do something related to design when she graduates. In the meantime, her focus is on her final season.

“It’s bittersweet. I’m happy to be done with rowing after so many years, also with my injury. But on the other side, you get addicted to it and you need it. You need to feel the pain in the legs and your arms.

“Once you start racing, you want to race every time you can and you get this rush of racing. I think it’s going to be sad when I’m done.”

Fortunately for Heuer, there is a silver lining. Even though her athletic eligibility is nearly complete, she still has another year before completing her degree. In the meantime, the season has yet to unfurl, and so too does the chance for it to be a memorable one.