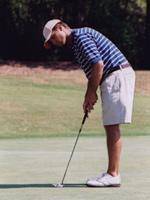 Clemson, SC – Bank of America, in cooperation with The Friends of Golf (FOG), Colonial Country Club and the Golf Coaches Association of America (GCAA), has announced the five finalist for the 2004 Ben Hogan Award. The Hogan is presented annually to the top men,s NCAA Division I, II or III or NAIA golfer, taking into account all collegiate and amateur competitions during the last 12 months.

The Hogan Award selection committee will name the recipient of the 2004 Ben Hogan Award on May 6. The presentation banquet will be held at Colonial Country Club on May 17, the Monday prior to the Bank of America Colonial.

Hendrix, a senior from Aiken, S.C., is a member of the reigning national champion Clemson Tigers. A first-team All-ACC selection and third-team PING All-America selection in 2003, Hendrix has claimed two tournament victories this season ^ the Puerto Rico Classic and Cleveland Golf/ASU Invitational ^ and the Sunnehanna Amateur last summer. Hendrix represented his country in the Walker Cup and USA vs. Japan Collegiate Golf Championship in the summer of 2003.

A senior from Greer, S.C., Haas is a two-time first-team PING All-America selection and a finalist for the Hogan last season. A three-time All-ACC performer and 2003 ACC Player of the Year, Haas has won medallist honors four times this season. The nation,s leader in scoring average, Haas represented the United States in both the Palmer Cup presented by Monster and Walker Cup last summer. Haas also claimed the South Carolina Amateur.

A three-time medalist this season, Nallen, a senior from Hackettstown, N.J., earned first-team PING All-America honors in 2003 and has been named All-Pac 10 twice. Nallen,s career stroke average is the lowest in Arizona history and his current season stroke average is on pace to set a school record. He competed on the United States teams in both the 2003 Palmer Cup presented by Monster and Walker Cup and has been named to the Palmer Cup team again this year. Nallen was champion of the 2003 Northeast Amateur.

The 2003-04 NCAA Division I leader in tournament victories, Stroud has earned medalist honors in six events this season and tied for first in another. The four-time Southland Conference Player of the Year, the senior from Groves, Texas, is ranked second in the country in scoring average. A 2003 third-team PING All-America selection, Stroud won the 103rd North and South Amateur last summer. Stroud was recently named to represent the United States in the 2004 Palmer Cup presented by Monster.