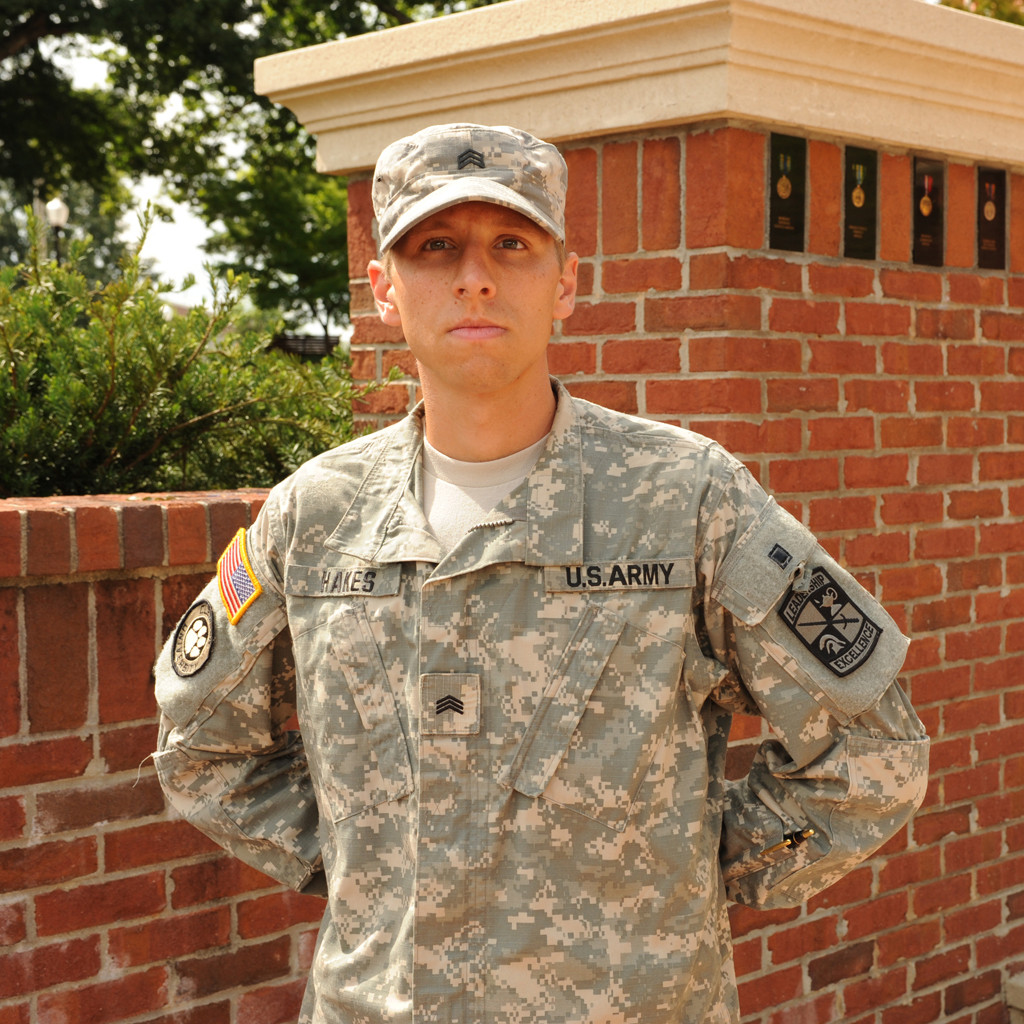 Note: The following appears in the September issue of Orange The Experience, expected to hit mailboxes this week.

Mark Elliott had his cross country schedule set. Or so he thought.

The Tigers were slated for the NCAA Pre-Nationals on Saturday, Oct. 18, in Terre Haute, Ind. But soon after the schedule was published, one of his student-athletes noticed a personal conflict.

Entering his third year in the Army ROTC program this fall, Roland Hakes had already bookmarked that particular Saturday for the battalion’s field training exercises in the Fants Grove area of Clemson’s Experimental Forest.

Elliott moved quickly to find a Friday meet in its place to better satisfy Hakes’ schedule. And that’s the way it’s gone for Hakes, whose college life has been a balancing act between ROTC, academics and cross country.

“Roland is very disciplined,” Elliott said. “ROTC uses our facility. When they finish a 6 a.m. run, Roland comes right over to train with our team.”

Cadets use the first two years of ROTC training as a brief understanding of the way the battalion works. Then, as third- and fourth-year students, cadets contract to be sworn in as officers upon graduation.

Hakes said his post-graduate career is likely to consist of three options.

“You’re commissioned as a second lieutenant in either the National Guard, the reserves or active duty,” he said.

The options of both the National Guard and reserves would carry with them the ability for Hakes to hold a civilian job at the same time.

But before Hakes puts too much thought into his future, he is focused on the present. The native of Irmo, S.C., is one of the program’s most consistent cross country performers. After taking a few weeks off this summer to “reboot” — in his own words —he eased back into training and was running 75 miles per week by the time the fall semester rolled around.

Hakes has always thrived more in the fall than in the spring. Some runners prefer endurance racing, while others have a niche for speed. Hakes sees it another way.

“I’m better running on terrain,” he said. “I do well with hills and being on an actual course, rather than the monotonous nature of track.”

His natural terrain skills were evident at Dutch Fork High School. He won two AAAA state championships in cross country, and was two-time South Carolina Gatorade Boys Runner of the Year as well.

Hakes was torn between college and entering the military as a senior at Dutch Fork, but ultimately chose the former when he learned of Clemson’s rich heritage as a military school.

“I talked to the battalion commander and found out they had a great ROTC program,” he said. “And they could also offer athletics, and those two things were important to me.”

Clemson’s Army ROTC program dates to 1893, the year the Upstate institution opened. In 1971, it became a fully elective program. Today, two- and four-year programs are offered as viable options for men and women who desire entry into the Army, National Guard or the reserves.

His interest in the military wasn’t sparked by a personal loss. He didn’t grow up in a military family. But rather, Hakes always felt compelled to serve others.

“I’ve always worked well when someone pushes me,” he said. “Being a part of something bigger than myself has always been important to me. The military is an excellent way for someone to do that.

“It’s something I’ve wanted to pursue, because of the sense of accomplishment. I’m fortunate that the cadre — our instructors — have been very flexible with my schedule. Their interest is in pushing us to be our best, and getting us ready for challenging positions.”

Hakes, on track to graduate with a degree in history next May, knows he’s a unique student-athlete at Clemson. But he also knows he is part of a strong tradition of cadets that make up the university’s storied military heritage.

Beginning with the first graduating class of 1896, more than 10,000 Clemson men and women have served in the armed forces. Some received the nation’s highest military decoration — the Medal of Honor — for acts of heroism in combat. Several were captured and held as prisoner of war. And according to the university’s official Web site, 484 alumni have made the ultimate sacrifice in service to their country.

In many ways, cross country is the perfect fit for someone like Hakes. It requires constant pushing — going one extra mile on a run, fighting through fatigue to make it up one last hill.

Like most do when the going gets tough, Hakes leaned on the advice and leadership of upperclassmen and his coaches.

“Aaron Ramirez played a big role, whether it was pushing me during a workout or simply providing good advice,” he said.

Now, it is Hakes’ turn to be the sounding board for his younger teammates. Leadership has always been more of a by-example approach for Hakes, rather than that of a stern voice. But he also knows that as a military officer, he’ll be required to alter his approach.

Elliott said in lieu of Hakes’ quieter leadership, it’s his ability to get the maximum out of each competition that sets him apart.

“He’s always led more by example,” Elliott said. “But he’s the type of guy you can count on; he never falters to meet his own expectations.”

And because of those qualities, Elliott won’t mind altering his team’s schedule every now and then to accommodate him.