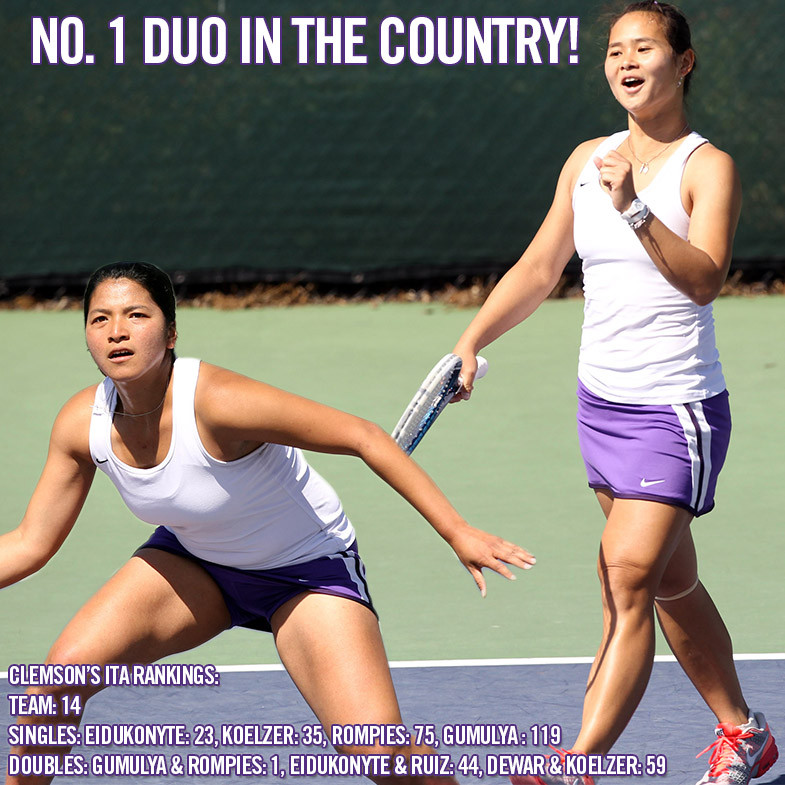 Gumulya and Rompies, 17-1 on the season, jumped from second to first in the doubles poll after starting the spring season with a perfect 5-0 record in dual matches, including a win over Michigan’s 10th-ranked duo at the ITA Teams Indoors Feb. 7 in Charlottesville, Va. The seniors from Jakarta, Indonesia won the Riviera All-American before falling to Harrison and McPhillips of UCLA in the semifinal round of the ITA Indoor Individual Championships during the fall season. Harrison and McPhillips held the top spot all season before switching spots with Gumulya and Rompies in this week’s poll.

In singles, the Tigers boast four players in the polls including two in the top 35. Junior Joana Eidukonyte improved from 27th to 23rd with an 18-3 record on the season including a 5-0 mark in dual matches this spring. Three of the five opponents she defeated were ranked in the top 125 and four of her five wins came in straight sets. In the ITA Team Indoors, she went 3-0 in singles play including a win over the 11th-ranked singles player from Florida, and 2-0 in doubles play.

Romy Koelzer also jumped in the polls from 85th to 35th. Koelzer, a senior, is 8-5 on the season and has faced tough competition in the number one spot for the Tigers. Five of her opponents so far this spring have been ranked.

New additions to the singles poll include Rompies and Gumulya who come in at 75th and 119th, respectively. Rompies is 12-3 overall and 5-1 in dual matches, while Gumulya is 13-5 and 4-2 this spring.

Two Clemson doubles teams enter the polls for the first time. The number three duo of Eidukonyte and Daniela Ruiz is 44th, while Koelzer and Tristen Dewar are listed at 59th.  Eidukonyte and Ruiz are 8-2 overall and 2-1 in dual matches and Dewar and Koelzer are 6-4 and 3-2, respectively.

Clemson returns to action Sunday, Feb. 15 as the team travels to Waco, Texas to face No. 6 Baylor.