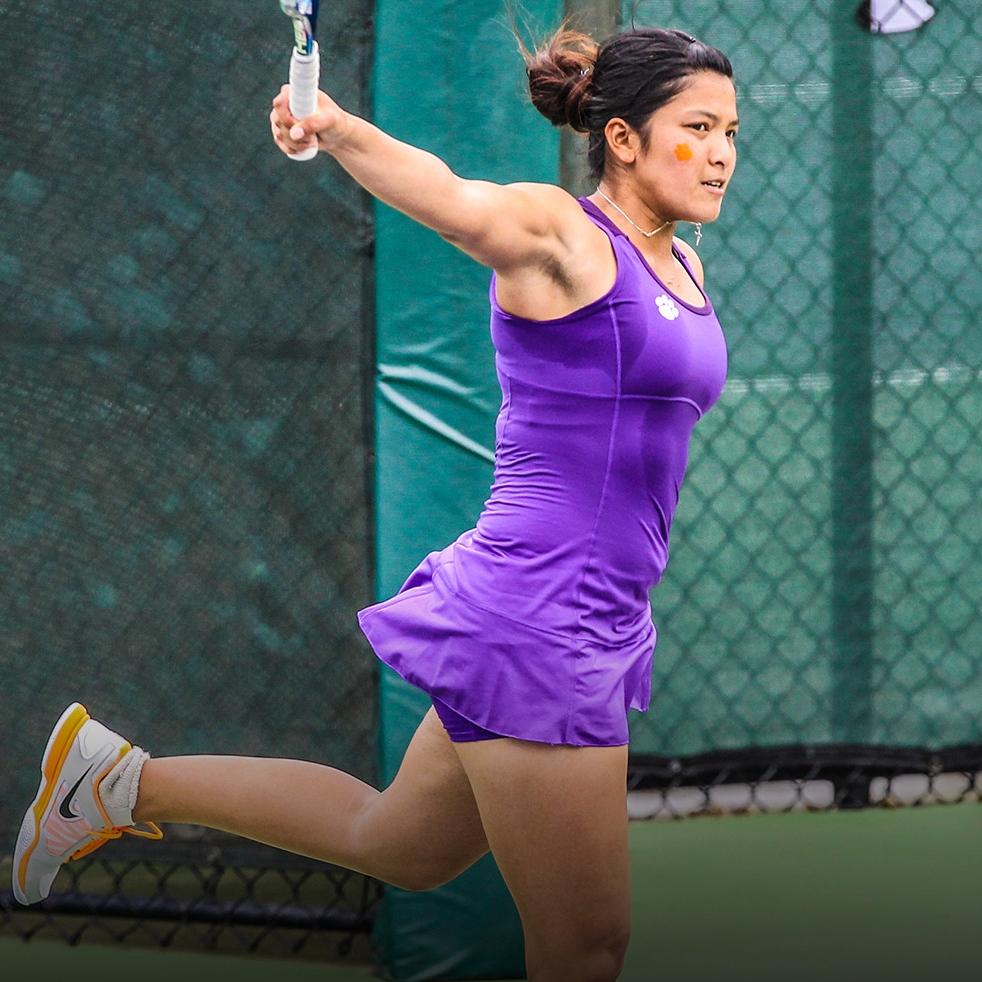 Day 3 // May 23 ATHENS, Ga. – The 2014 women’s tennis campaign drew to a close on Friday, as the doubles team of Jessy Rompies and Beatrice Gumulya was eliminated from the Round of 16 at the NCAA Doubles Championships at the Dan Magill Tennis Complex. The Clemson duo mounted an incredible comeback in the match against the nation’s 13th-ranked tandem, Caroline Price and Whitney Kay of UNC, but fell just short in a third-set tiebreaker.  Gumulya and Rompies fell, 6-3, 2-6, 7-6(5), in the contest. Kay and Price took the first set, placing the onus on Clemson to even it up. Rompies and Gumulya responded emphatically, winning the second frame 6-2. Price and Kay looked to have the match in hand in the third set, as they took a quick, 5-2 lead. However, Clemson chipped away, and tied the match at 5-5, and would force a tiebreaker at 6-6. The Tigers claimed the first three points of the tiebreaker, and led 4-1, before UNC scored six of the next seven points to close.  Gumulya and Rompies moved into the second round after the nation’s top-ranked doubles team from UCLA was forced to retire from the first round match due to injury.  The Tiger program finished another successful season, advancing to the team Round of 16, and sent two singles players and one doubles team to the second rounds of their respective events.  Rompies closes the year with 32 doubles wins, which is tied for the fifth-most in a single season in school history. She went 10-1 in ACC play, and won 21 singles matches as well. Gumulya was a Third-Team All-ACC selection this season, the second straight year she has earned conference honors.  FULL RESULTS May 21 // Singles 1st Round #33 Romy Koelzer def. #47 Nadia Ravita (Kentucky), 6-3, 3-6, 6-3 #34 Yana Koroleva def. #40 Kiah Generette (Baylor), 6-3, 6-3 May 22 // Doubles 1st Round, Singles 2nd Round Singles: #24 Lynn Chi (Cal) def. #33 Romy Koelzer, 7-5, 6-1 Singles: #13 Chanelle Van Nguyen (UCLA) def. #34 Yana Koroleva, 3-6, 7-5, 6-3 Doubles: #32 Rompies/Gumulya def. (1) #1 Anderson/Brady (UCLA), 0-3, retired May 23 // Doubles Round of 16 Doubles: #13 Wintney Kay/Caroline Price (UNC) def. #32 Rompies/Gumulya, 6-3, 2-6, 7-6(5) Day 2 // May 22, 2014 Gumulya and Rompies Move On To Round of 16 in Shocker ATHENS, Ga. – Jessy Rompies and Beatrice Gumulya were the beneficiaries of a stunning development at the NCAA Doubles Championships, as the nation’s number-one doubles team and top seed retired due to injury in their head-to-head match. UCLA’s Robin Anderson and Jennifer Brady, ranked No. 1 in the nation, forfeited early in the first set, leading 3-0, sending Clemson’s duo on to the Round of 16 at the 32-team Doubles field.  The injury appeared to occur in the second game of the first set, after which the UCLA player received medical attention. After resuming play, they decided to retire after the third game.  Gumulya and Rompies advance to play UNC’s Caroline Price and Whitney Kay on Friday at 2 p.m.  In singles play, Yana Koroleva suffered a three-set defeat to 9-16 seed Chanelle Van Nguyen of UCLA, 3-6, 7-5, 6-3, and Romy Koelzer lost in straight sets to Lynn Chi of Cal, 7-5, 6-1, ending their respective seasons.  Koroleva closes her career 55-18 in singles play, including a 27-10 record this season. She was an All-American last season, but fell a win shy of the honor this season. She was an All-ACC selection in both 2013 and 2014.  Koelzer, who earned her first All-ACC honor this season as a junior, finished the year 25-9 in singles. She had won her NCAA debut the previous day against Nadia Ravita of Kentucky on Wednesday.  Day 1 // May 21, 2014 Koroleva, Koelzer Open NCAAs with Victories ATHENS, Ga. – Junior Romy Koelzer and senior Yana Koroleva each earned victories in the First Round of the 2014 NCAA Singles Championships on Wednesday at the Dan Magill Tennis Complex in Athens, Ga. Koelzer won her NCAA debut over Nadia Ravita of Kentucky, 6-3, 3-6, 6-3, and Koroleva defeated Baylor’s Kiah Generette, 6-3, 6-3. Times for the Singles Second Round and Doubles First Round matches will be released at the end of play on Wednesday. Koelzer advances to play Lynn Chi of Cal for the third time this season in the Second Round on Thursday at 9 a.m. Chi knocked off Emina Bektas, a seeded player from Michigan. Koroleva plays UCLA’s Chanelle Van Nguyen at noon.  Koroleva is now 4-1 in her NCAA Singles Championships career, as she advanced to the quarterfinals last season. Koelzer improved to 10-1 in three-set matches this season, which ties her for fourth in school history for three-set wins in a single season. Beatrice Gumulya and Jessy Rompies will begin play in the doubles portion of the tournament on Thursday as well. They’ve been dealt top-ranked Robin Anderson and Jennifer Brady of UCLA in the draw, with the match scheduled to start at 4 p.m.