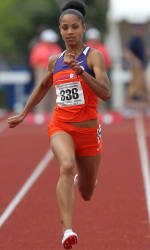 CLEMSON, SC – Three hurdlers off the nation’s top-ranked women’s track & field team recorded personal bests Friday to highlight the first day of action at the Clemson Tiger Qualifier, held at the school’s Rock Norman Complex. The Tigers also captured wins in the women’s 1500 and discus throw, and the men’s 800 on Friday.

The Clemson women’s high hurdlers were impressive Friday. Monique Gracia led a trio in recording a personal best 13 seconds flat to qualify for Saturday’s final. She was followed by Keni Harrison (13.04) and Jasmine Edgerson (13.09) in second and third. All three now rank fourth through sixth in the Clemson record books for the event.

Clemson sent four to finals in the women’s 100-meter dash, including Stormy Kendrick, who returned to the track for the first time since suffering an injury in the prelims at the NCAA Indoor Championships. She ran a time of 11.60, which puts her on the outside looking in for the East Prelims at the moment. She has a chance to improve her time in the final Saturday. Edgerson (11.41), Dezerea Bryant (11.42) and Gracia (11.54) also qualified for the 100 final.

Warren Fraser advanced in the men’s 100-meter dash. The native of the Bahamas easily won his heat with a time of 10.38. He will also run the 200 on Saturday. In the men’s high hurdles, all three Tiger entries advanced to Saturday’s final, led by Spencer Adams at 13.66. Clemson was without Charlton Rolle, one of five student-athletes from the track & field program to earn an undergraduate degree Friday.

Kim Ruck jumped out in front from the get-go of the women’s 1500 and cruised to victory. The senior, who has qualified for the NCAA East Preliminary Round in both the 5K and 10K, raced to a time of 4:32 in her final tuneup. Lisa Girard was fifth in 3:47.40. Chris Slate won the men’s 800 meters with a time of 1:48.62, consistent with his efforts from previous meets. Nathan Hendershot followed in second place at 1:49.43, a personal best for the sophomore from Indiana.

Brittney Waller won the women’s discus Friday. She did it with a season best in the event, hitting a mark of 163’5″ on her sixth and final attempt.

Jameel Abdul-Mateen tied for third in the men’s event.

The Tigers return to action to close out the regular season on Saturday. The first field event will be the men’s javelin at 10:00 AM. The first track event is the 4×100 relay at 1:00 PM.