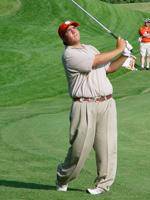 This year’s event is to be held at the newly renovated Forest Hills Golf Club. The course has added length, bunkers and slopes to make this course a true test for the collegiate golfers this year. Forest Hills is a 7, 231 yard par 72 layout.

Clemson finished second at the 2003 tournament to host team Augusta State. The Jaguars shot a tournament record 44-under- par to beat the Tigers by two strokes. Clemson’s 42- under- par score is a school record for any event.

D.J. Trahan shot a career best 15-under-par 201 to finish second, while current junior Jack Ferguson shot and 11-under 205. All three of Ferguson’s rounds were in the 60’s, one of only nine times in school history that has been accomplished.

Sophomore Jack Ferguson will lead the way for the Tigers at this years event coming off solid top 10 performances at last week’s Atlanta Intercollegiate. Senior All Americans Gregg Jones and Matt Hendrix will help lead the way for the Tigers as well. Jones had a career best 203 at this event two years ago when he lost in a playoff to Tennessee’s David Skins. Rounding off this five- man team is junior transfer Brent Delahoussaye, who did not play at the Atlanta Intercollegiate.