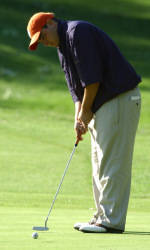 Clemson Lineup for ACC tournament Clemson will bring two seniors, two juniors and a freshman to the ACC Tournament this weekend at The Old North State Club. The lineup will be led by Tiger senior Jack Ferguson, who has had a significant impact on Clemson’s last two ACC Tournament titles. Brian Duncan, a junior from Greenville, and Martin Catalioto, a junior from Hilton Head, SC, are two other Clemson veterans who have played in the ACC tournament previously. Duncan finished 21st last year with a 218 score and Catalioto finished 30th at the 2002 Tournament, also at The Old North State Club when Clemson finished third as a team.

Brent Delahoussaye and Tanner Ervin will both play in their first career ACC Tournament. Delahoussaye has played in a conference tournament in his career, however, as he played in the 2002 Southeastern Conference Tournament for South Carolina. He finished 36th with a 225 score. Ervin is a freshman and has played in three tournaments this year for the Tigers. Ferguson finished third in 2003 and second last year in helping the Tigers to a pair of ACC Championships. He was Clemson’s top golfer at both tournaments. The senior shot a 214 in 2003 to finish third when he had rounds of 72-72-70. He had a walk-off tournament winning eight-foot birdie putt on the final hole to give Clemson the championship.

Last year he had a 206 score and the 10-under-par was good enough for second place. He lost the individual title by just one shot to Sean Moore of Wake Forest. The 206 score is the third best 54-hole score of Ferguson’s career. He had a 204 at the Topy Cup in Japan in 2003 and a 205 at the Augusta State Invitational that same year. Both of those scores were also recorded on a par 72 course.

Clemson Won 2004 ACC TournamentThree Tigers Finish Among Top Six April 18, 2004 New London, NC–Gregg Jones and Stephen Poole had final round scores of 69 to lead Clemson to a 10-under-par team round and the championship of the ACC men’s golf tournament on Sunday. Clemson finished with a team score of 837, 27-under-par for the three rounds.

The performance was just one shot off the ACC Tournament record or 836 set by the 1998 Clemson team at the same Old North State Club course at New London, NC. It marked the second straight year that Clemson had won the ACC title, the third time Clemson has won in back to back years under Head Coach Larry Penley. It was the eighth ACC title overall for Penley, who was recently inducted into the College Golf Hall ofFame. He led the Tigers to the 2003 NCAA Championship. Clemson entered the final round with a seven-shot lead over NC State, then finished the tournament eight shots ahead of Wake Forest. It was the largest margin of victory for Clemson in the ACC Tournament since winning the 1997 event by 10 shots. It was Clemson’s first victory of the 2003-04 academic year, the first since Clemson won the NCAA title at the end of the 2003 season.

The Demon Deacons ended the 54 holes at 19 under-par, good enough to win most years, but still well back of Clemson’s team figure. Georgia Tech, who had a tournament best 274 team score on Sunday, finished third with an 848 team total. N.C State was fourth at 854, while North Carolina was fifth at 856. Duke, the only ACC team to defeat Clemson twice in 2003-04, was sixth at 857.

Jones and Poole led Clemson with final round 69s, while Matt Hendrix and Jack Ferguson had 70s. Brian Duncan, who had a counting score each of the first two days, had a 74 on Sunday. Sunday’s final round marked just the second time all year that Clemson had four players shoot under par on the same round.

“We had everyone in the game today, that was important,” said Penley. “Unlike yesterday, we got off to a slow start. But, we got it going on holes 4-13 and that got us a 10-stroke lead for most of the back nine.

Hendrix finished with a 208 score for the 54 holes eight-under-par and tied for third. It was his sixth top 10 finish this year, his fourth top five finish in the spring. Poole finished sixth overall with a 210 total, six-under-par. It marked the first time since 2000 that Clemson had three players finish in the top six individually.

Jones broke out of a slump with his 69 on Sunday. It was his low score in the last 19 rounds, dating to a 66 at the North Florida Collegiate on Feb. 9. It had been 11 rounds since he had broken par. Duncan finished with a 74 on Sunday to end the tournament with a 218 total, the same figure as Jones. Both players finish in a tie for 21st.

Ferguson Has Played Well at ACC tournament Clemson senior Jack Ferguson has played well in his two previous appearances in the ACC tournament. Both have been played at The Old North State Club at Uwharrie Point, NC, the site of this year’s event. Ferguson finished third in 2003 with a 214 score, then finished second in 2004 with a 206 score. The natural progression would be to move to number-one as a senior.

For his six career rounds at the ACC Tournament, Ferguson has a 70.0 scoring average. He has shot at par or better in all six of his rounds, including a career best 67 in the second round last year. His 206 score last year at the ACC Tournament is the third best tournament score of his career, as is the 10-under par figure.

Ferguson has never won a college golf tournament while wearing a Clemson uniform. He has had four second-place finishes. In addition to last year’s ACC Tournament, he also finished second at The 2002 Topy Cup, the 2003 Chris Schenkel and the 2003 Atlanta Intercollegiate.

Clemson Looks for Three ACC Titles in a Row Clemson has won the ACC men’s golf tournament on nine occasions (including co-championship with NC State in 1990), including each of the last two years. This is the third time Clemson has won back to back titles. In addition to the 2003-04 championships, Clemson also went back to back in 1987 and 1988 and 1997 and 1998. Clemson has never won three in a row.

Winning back to back ACC Tournaments has been very common in recent years. In addition to Clemson’s active streak, Georgia Tech did it in 2001-02, Clemson in 1997-98, and North Carolina in 1995-96. The last time a team won three straight ACC golf championships was the 1991-94 era when Georgia Tech won four in a row under Puggy Blackmon. All four of those championships were recorded at Northgreen Country Club in Rocky Mount, NC. The record for consecutive ACC golf championships is 10 in a row by Wake Forest from 1967-76.

Charles Warren was a back to back champion, winning in 1997 by four shots over Matt Kuchar, and in 1998 by one shot over Don Hill of North Carolina. Warren is the only back to back ACC Champion since 1977-78 when Scott Hoch of Wake Forest won twice. John Engler was Clemson’s most recent champion. The former Clemson All-American beat Bryce Molder by two shots in 2001.

Clemson vs. the ACC Clemson has won the ACC Tournament each of the last two years. Clemson’s senior class is 149-36 against ACC teams in all tournaments over the last four years, a 80.5 percent winning mark. Clemson has a winning record against each ACC team over the last four years, including Virginia Tech, who joined the league for golf this year. Miami (FL) does not have a golf team. Boston College joins the ACC next year.

Clemson is a combined 22-0 against teams from Virginia and is 51-5 against North Carolina and NC State combined over the last four years. The Tigers were dominant against ACC teams each of the last two years, posting a 47-1 record against league teams in 2003, the year Clemson won the National Championship, and a 50-4 last year when Clemson won the ACC Tournament and the NCAA East Regional.

Ferguson in top 10 in Career Average List Clemson senior Jack Ferguson stands fifth in Clemson history in career stroke average with a 72.46 figure. He trails only current PGA Tour player D.J. Trahan, three-time All-American John Engler, current PGA Tour player Lucas Glover and 2003 Walker Cup player Matt Hendrix. He is just above of the 72.48 stroke average of current PGA Tour veteran Jonathan Byrd. In addition to his career stroke average, Ferguson is also tied for ninth in rounds in the 60s (22), 11th in rounds at 75 or better (104), eighth in rounds at par or better (60) and 11th in under par rounds (40). His 14 top 10 finishes also rank in a tie for12th in school history.