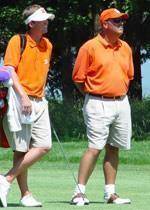 Golf to Compete in ACC Championships

The Clemson Tiger golf team competes this week in the ACC Championship in Uwharrie Point, North Carolina at The Old North State Golf Club. The event will take place Friday-Sunday, April 21-23 at the par 72 course north of Charlotte.

The Tigers won their first tournament April 10-11 in Alpharetta at the U.S. Collegiate. It was Clemson’s first tournament title in two seasons. This is the first time since 1997 that Clemson enters the ACC tournament coming off a victory. Stephen Poole won the individual title at the United States Collegiate, giving Clemson a team title and the individual title in the same tournament for the first time in four years. Clemson looks to take the needed momentum into this week’s conference championship to try and record its third title in the past four years. In the field this week is Georgia Tech (4th ranked), Clemson (10), Wake Forest (15), Duke (16), North Carolina (19), N.C. State, Boston College, Florida State, Maryland, Virginia, Virginia Tech.

The Tigers will take the same lineup that was used in last week’s victory at the US Collegiate, a lineup that includes two seniors, a sophomore and two freshmen. Brian Duncan is a senior who will be playing in his third ACC tournament. The native of Greenville has the lowest stroke average on the team for the year with a 73.25. Of the eight tournaments Duncan has played he has finished in the top-20 in all but one, with two of his finishes in the top-10. He is currently ranked 20th according to the latest Golfweek/Sagarin Rankings. This will be the sixth straight year a Duncan has been in the lineup for Clemson at the ACC Tournament. His brother, Ben Duncan, was a starter at the ACC Tournament in 2001-02-03.

Stephen Poole is the other senior competing this week for the Tigers. The native of Spartanburg, SC won his first ever collegiate event last week and was the first Tiger to win since Matt Hendrix won the Augusta State Invitational in 2004. Poole is second on the team in stroke average with a 73.37 and has had four top-13 finished this season. He jumped from 67th to 46th in the Sagarin rankings with his victory at the US Collegiate.

Sophomore Tanner Ervin is in the line-up again this week, his fourth straight tournament appearance. Ervin has finished in the top-20 for the past three weeks and looks to continue his fine play this week at the Conference Championship. He ranks third on the team in stroke average with a 73.72.

Clemson will take two freshmen to the ACC tournament for the first time since 1998 when John Engler and Lucas Glover were rookies. Vince Hatfield is making his fifth career start for Clemson this week. The native of Greenwood has a 74.17 stroke average after four events, fourth best on the Clemson team. He placed 17th in last week’s U.S. Collegiate Championship to help Clemson to its first of the season. He was Clemson’s top golfer with a seventh-place finish at the Augusta State Invitational earlier this month.

David May is the other freshman stating this week. The native of Auburn, NY has played in eight events this season and has a 75.04 stroke average.