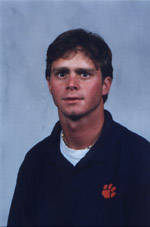 Golf Tied For Third After Round One At NCAA East Regional

Sophomore Stephen Poole and junior Brent Delahoussaye each shot an even par 70 to lead Clemson to a 288 team score and a tie for third after day one of the 2004 NCAA East Regional at the Yale University Course in New Haven, CT. Florida led the field with a 286, followed by Georgia’s 287, Clemson and Georgia State, which also shot a 288.

Poole is playing in his first NCAA Tournament but has come on strong late in the year. He has three top 10 finishes on his resume, including a sixth-place finish at the ACC Tournament. Delahoussaye played in the first two rounds of the NCAA Tournament in 2001 with South Carolina and was a last-minute replacement for Brian Duncan, who injured his thumb earlier this week. Each had two birdies and two bogeys during Thursday’s round and stand seventh on the individual leaderboard. Kenneth Fahey of Rhode Island and Bill Haas of Wake Forest shot a three-under 67 to lead the individual race.

All-ACC members Matt Hendrix and Jack Ferguson each shot a four-over 74, while fellow All-ACC member Gregg Jones shot a five-over 75. All three players were hampered by a double-bogey on the front nine but bounced back with solid play the rest of the way. Hendrix had a team-high two birdies on Thursday.

The Tigers, whose late-morning tee time on Thursday was delayed by more than an hour due to fog, are scheduled to tee-off beginning at 7:12 AM on Friday.