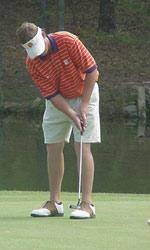 Number-one ranked Clemson will open will the spring portion of its schedule Feb. 17-18 at the Mercedes Benz Collegiate Championship in Jacksonville, FL. The two-day 54-hole event will be played at Sawgrass. The Tigers, who will play the event for the first time, will be one of nine top 20 teams in the 15-team field.

Clemson will bring an All-South Carolina lineup to the Mercedes Benz Collegiate. Clemson is led by D.J. Trahan (Inman, SC), who had a 70.91 stroke average in the fall, including nine rounds at par or better. He is Clemson’s career stroke average leader at 71.58 and is the reigning winner of the Jack Nicklaus Award, the top player in college golf.

Gregg Jones (Florence, SC), is a returning All-American who will be in the Clemson lineup. He was named second-team All-American last year after recording a 71.81 stroke average. He finished his fall of 2002 strong by going 3-0-1 at the Hooters Collegiate Match Play Championships at Myrtle Beach.

Jack Ferguson (Seneca, SC) and Matt Hendrix (Aiken, SC) both had outstanding fall performances, scoring identical 71.09 stroke averages. Ferguson, a sophomore, was Clemson’s top golfer at the Topy Cup with a 204 score for 54 holes and the Ping Preview, where he finished eighth individually. Hendrix opened the year with a 65 at the Topy Cup where he finished fourth individually. He also finished fourth at the Jerry Pate. Ben Duncan (Greenville, SC) started the year with a pair of top 10 finishes, his first two top 10s as a Tiger. He finished seventh in Japan at the Topy Cup, then led the Tigers to the Carpet Classic championship with a five-under-par 211 score for his 54 holes.