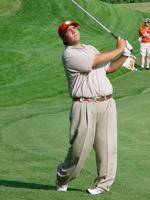 Golf Opens Season at The Ridges

The Clemson golf team begins play in its 2003-04 season, Saturday at The Bank of Tennessee Intercollegiate at the Ridges in Jonesborough, TN. The 18-team tournament will be held at The Ridges Golf and Country Club on a par 72 hole course designed by Arthur Hills that is 7001 yards in length. The field will play 36 holes on Saturday and 18 on Sunday.

The Tigers are ranked third in the nation according to the preseason poll conducted by Golfweek and rank ninth according to Golf World. Clemson finished third at the Bank of Tennessee Intercollegiate at the Ridges in the fall of 2003. This will be Clemson’s sixth appearance at the Ridges overall. Larry Penley’s team won the inaugural tournament in the fall of 1998 behind Jonathan Byrd, who is now on the PGA Tour. Byrd won the event with a 207 score over the three rounds.

Jack Ferguson, a senior in his third year as a starter will lead the Tigers this weekend. Currently ranked third in the nation according to Golfweek and 10th according to Golf World, Ferguson is the only remaining starter from Clemson’s 2003 National Championship team. He shot a 214 at The Ridges last year, to rank sixth in the individual race. He finished 13th at the event his freshman year in what was his first career tournament as a Clemson golfer.

Brent Delahoussaye is another senior leader who will be competing for the Tigers this weekend. The native of Greenville, SC, had an outstanding summer that included five top 10 finishes, featuring a fourth-place finish at the Players Amateur in July. Delahoussaye had a 73.97 average last year, including a fourth place finish at the NCAA East Regional when he was Clemson’s top golfer.

Three other returning lettermen will be in the lineup for the Tigers this weekend. Brian Duncan, a reserve on Clemson’s 2003 National Championship team, will be in the lineup for the second straight year. He shot a 219 for a 25th place finish at The Ridges last year and had a 74.86 stroke average for the season. He also had an outstanding summer that included a victory at the Palmetto Amateur and a second-place finish at the Dogwood Invitational.

Martin Catalioto was the only Clemson golfer to qualify for the national stroke play competition at both the US Amateur and the US Public Links. A starter on Clemson’s third-ranked 2002 team as a freshman, Catalioto is ready to have a significant impact in this, his red-shirt junior season.

Stephen Poole a starter in seven of Clemson’s 13 events last year, will also be in the field. Poole finished second in the South Carolina State Amateur this past summer and had a 73.05 stroke average for the Tigers in 2003-04. He had top 10 finishes at the Schenkel, the Atlanta Intercollegiate and the ACC tournament. His 210 score at the ACC helped the Tigers to the conference championship.