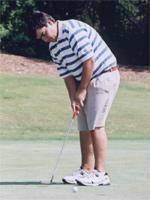 Ferguson had rounds of 74-76-73 on the par 72 course that is 7510 yards in length, the longest course in Clemson history. Martin Catalioto was Clemson’s second best golfer at the event with a 225 score. Catalioto was seventh in the individual race entering the day after shooting a 68 in the second round, but he skied to an 82 on Sunday. He finished 40th.